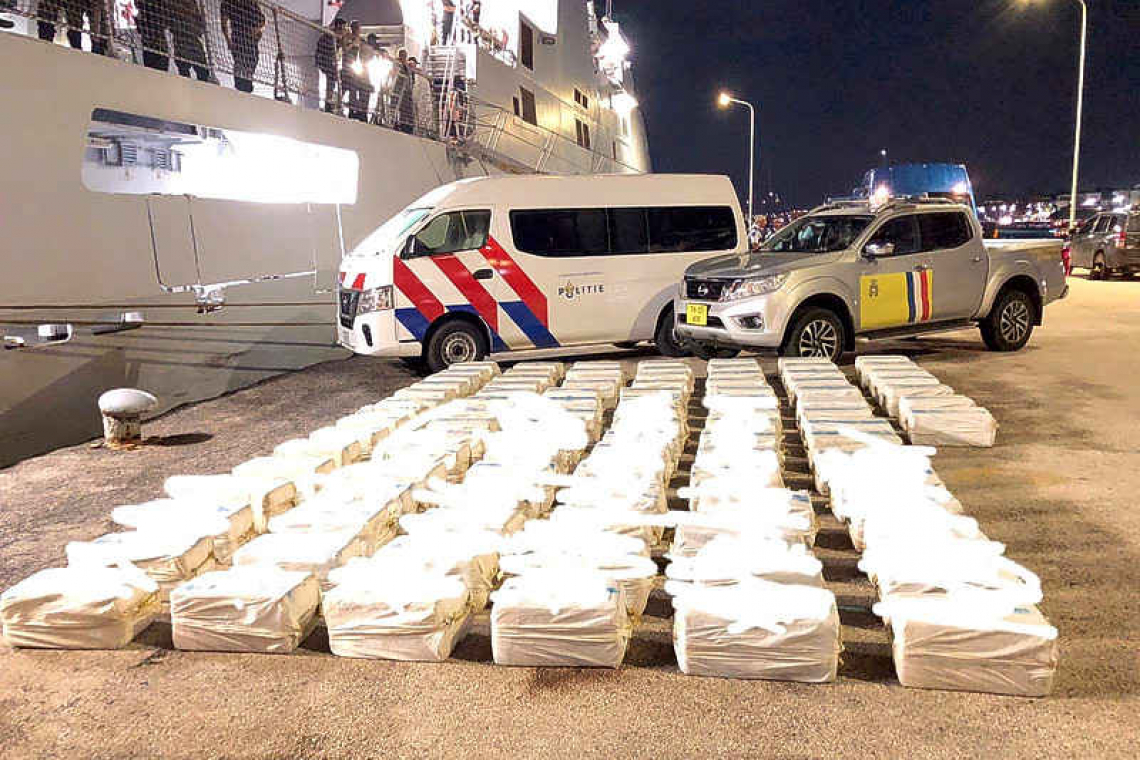 Part of the 4,450 kilos of drugs intercepted on August 10 placed on the quay in Kralendijk, Bonaire.

Zr. Ms. Groningen patrols the waters of both the Leeward and Windward Islands, and supports the American, French and British Navies in tracing drug shipments in the Caribbean Sea. The actions of the patrol ship and the Coast Guard are coordinated from the Maritime Operation Center (MOC).

At the direction of the MOC, which had spotted a suspicious vessel on the radar, Zr. Ms. Groningen changed its course early Tuesday morning and approached the boat, which then took off. Fast-raiding interception and special forces craft FRISCs were used in pursuit.

The five suspects on board the vessel threw bales of drugs into the sea during the chase. The Coast Guard was able to retrieve the drugs: 100 kilos of marijuana and 450 kilos of cocaine.

After the suspects had been arrested and boarded the Zr. Ms. Groningen, the captain of the patrol ship was notified by the MOC that two suspicious go-fasts had been spotted. These were drifting next to each other for a refuelling stop.

As soon as the eight persons on board the go-fasts saw the naval vessel approaching, they threw all the drugs into one of the go-fasts and took off in the other one. The Coast Guard started chasing the suspects with FRISCs, while the crew of Zr. Ms. Groningen confiscated the go-fast with drugs.

With a top speed of 82 kilometres per hour, the FRISCs overtook the go-fast. The suspects did not respond to stop signs and warning shots. The FRISCs’ crews then aimed their weapons at the go-fast’s outboard motor and blew it. The eight suspects were arrested by the Coast Guard and transferred to Zr. Ms. Groningen.

The detainees were transporting 2,300 kilos of cocaine. In the Netherlands, these drugs have a street value of more than 160 million euros. The Zr. Ms. Groningen sailed to Bonaire, where the suspects and drugs were handed over to the Dutch Caribbean Police Force KPCN.

The 13 suspects arrested on August 10 are currently in prison in Kralendijk. Also detained are eight suspects, who were arrested two days earlier, on Monday, August 8, after their go-fast with 1,600 kilos of drugs on board was intercepted by the Coast Guard.

So far this week, the Coast Guard has seized 4,450 kilograms of drugs.

The Dutch Ministry of Defence will upgrade the armed forces’ equipment in 2024. Of the 50 FRISCs available to Defence, 13 will be replaced by future fast interceptors FFIs, while others will be modernised. In addition, a number of amphibious FRISC vessels are being replaced in a different way.

The Navy continues to deploy the modified FRISCs from the patrol vessels in the Caribbean. The Maritime Special Operations Forces of the Navy and the Commando Corps of the land forces will sail with the FFIs also in operations where armed resistance is to be expected. This makes the FFI a real Special Forces vessel.

The FRISCs can accommodate a maximum of eight passengers, while the FFI has a maximum of 12. The FFI has a powerful vessel-related camera and a high-speed navigation system. FFIs are currently in service with UK Special Forces and overseas agencies.

The intention is that the new vessels and the modernised FRISCs can last at least 10 years, Defence announced.