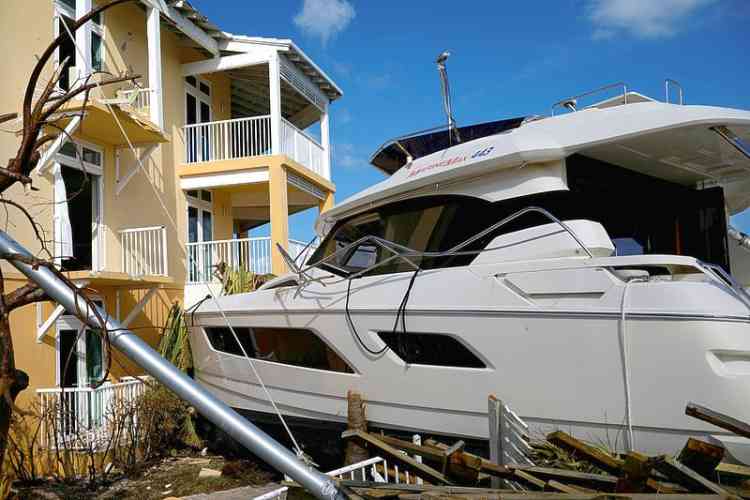 A destroyed boat is seen at a devastated hotel after Hurricane Dorian hit the Abaco Islands in Marsh Harbour, Bahamas, on Thursday.

THE HAGUE–The planned large emergency assistance exercise named Caribbean Coast of Dutch Defence and other Dutch Kingdom authorities has been called off to allow for a real-life operation to assist the hurricane-hit Bahamas.

The Dutch Defence Ministry announced in a press release on Thursday that the Dutch Kingdom would be providing emergency assistance in the Bahamas. Dutch Navy ships HMS Johan de Witt and HMS Snellius, currently in St. Maarten, will leave for the Bahamas in the coming days after the humanitarian goods have been loaded.

The request for assistance came from the Bahamas via the Caribbean Disaster Emergency Management Agency (CDEMA). The Dutch Navy ships were already in the Caribbean for the Caribbean Coast exercise, which was originally to take place in Curaçao, Bonaire, St. Maarten, St. Eustatius and Saba from September 9 to 19.

It is expected that the two Navy ships will be leaving St. Maarten within a few days and will be on location in the Bahamas by September 11. The exact content of the emergency aid is currently being worked out by Dutch Defence and CDEMA. The emergency assistance is being financed from the budget that Minister of Foreign Trade and Development Cooperation, Sigrid Kaag has made available.

HMS Johan de Witt is an amphibian transport ship that serves as a harbour, airport and storage area in one. It has a large deck for vehicles and relief goods and medical personnel of the Marines, while the ship has an interior dock from which ships can enter and leave.

Originally, the Windward Islands were to take part in the Caribbean Coast exercise organised by Dutch Defence with the participation of more than 700 military personnel of the Navy, Marines and Air Force, and four ships. The exercise has been cancelled and will take place at a later date.

In a reaction, Saba Island Governor Jonathan Johnson said he was glad to learn that Dutch Defence was going to the Bahamas instead, where emergency assistance is direly needed. “The focus needs to be on the Bahamas,” he stated.

Category 5 Hurricane Dorian has had a devastating effect on the Bahamas and has caused at least 20 deaths. According to the Red Cross, at least 13,000 homes were destroyed or heavily damaged. An estimated 76,000 people are in need of assistance.