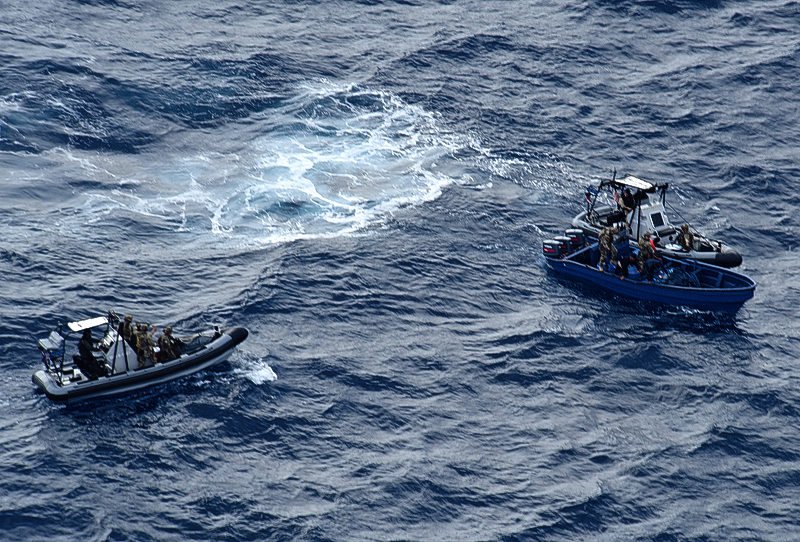 The two RHIB motor boats of the Zr. Ms. Van Amstel, with a boarding team of the US Coast Guard, near the suspect go-fast vessel. (Photo by Dutch Defence)

THE HAGUE–The Royal Dutch Navy in the Caribbean last week caught two shipments of cocaine totalling close to 700 kilograms in one night, the Ministry of Defence announced on Tuesday.

The Navy station ship Zr. MS. Van Amstel was patrolling as part of an exercise near Curaçao when it received the first report on a suspect motor boat, a so-called go-fast, north of Colombia’s territorial waters.

The NH-90 on-ship helicopter was deployed once the navy multi-purpose frigate got close enough to detect the exact location of the go-fast. With the assistance of the helicopter, both of the rigid-hulled inflatable RHIB boats of the Van Amstel were sent out with a boarding team of the United States Coast Guard.

Upon detection, persons on board proceeded to throw the narcotics overboard. Ten packages were collected from the sea, while another three were found in the go-fast. The packages contained about 325 kilogram of cocaine. The three crew members of the go-fast were arrested.

Shortly after, a Dash-8 surveillance plane of the Dutch Caribbean Coast Guard reported that it had observed another suspect vessel. Again the NH-90 helicopter was deployed. The suspect vessel ignored the stop signals by the helicopter crew and was forced to stop with warning shots.

On the vessel, the law enforcement detachment of the US Coast Guard found fifteen packages with cocaine, weighing about 350 kilogram. The suspects on both vessels and the confiscated drugs were transferred to a US Coast Guard ship.

Commander of the Van Amstel, Lt. Captain Eric Toebast spoke of two successful action within a very short time-span. The Van Amstel carries out operations in the Caribbean sea as part of the permanent multi-national anti-narcotics operation led by the Joint Inter-agency Task Force South.

Dutch Minister of Security and Justice Stef Blok made mention of the double action of the Van Amstel during the weekly question hour in the Second Chamber of the Dutch Parliament on Tuesday. Blok suggested that the Royal Dutch Navy was doing good work to help stem the transport of narcotics from the “source,” South America.

The Minister referred to the latest drug bust when he was answering questions by Member of the Second Chamber Madeleine van Toorenburg of the Christian Democratic Party CDA who sought clarity in regards to an article that appeared in the Telegraaf newspaper on April 15, headlined “Netherlands Narco State.”

In the newspaper article, the Netherlands was described as a front runner in Europe where it pertains to the production of narcotics, mostly synthetic drugs and marijuana, and as a trans-shipment port for illegal drugs. The article cited a recent report of the European Union’s law enforcement agency Europol on heavy and organised crime. The report spoke of an enormous increase of cocaine traffic from South America to the Netherlands in recent years.

Minister Blok explained that the well-organised infrastructure of the Netherlands with its first-class airport and harbour and its well-educated population had its downside because not only the legal businesses made use of these facilities, but unfortunately also the illegal trade.

According to the Minister, the Dutch Government did everything in its power to combat illegal drug trade and criminal organisations by making more means available to law enforcement agencies including the Police and the Public Prosecutor’s Office.