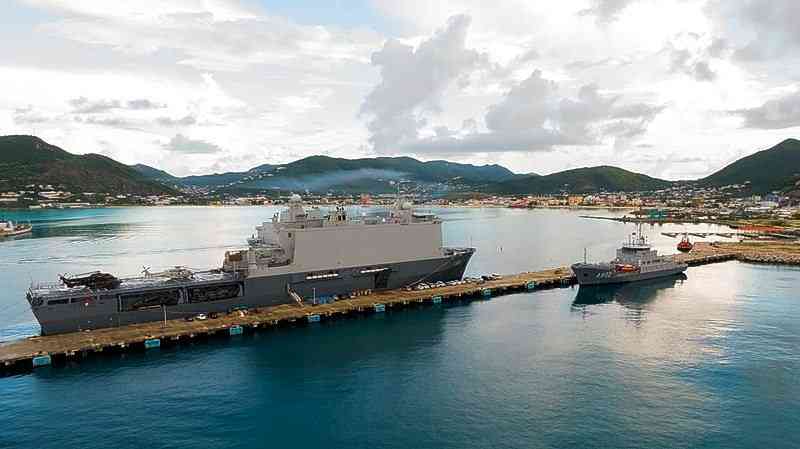 PHILIPSBURG–The Royal Dutch Navy hydrographic survey vessel Zr. Ms. Snellius started the ocean crossing from the Caribbean to her home port of Den Helder, the Netherlands, last week because the vessel has completed her mission to chart the sea floor around the Dutch Caribbean islands.

The ship and her crew are expected to be back in the Netherlands by Christmas Day, December 25.

The ship has been mapping the seabed around the Dutch Caribbean islands using sonar, for the past three months. The ship also used specialised equipment to detect objects on the sea floor that could be potentially dangerous for shipping.

Zr. Ms. Snellius sailed around St. Maarten, St. Eustatius, Saba and the Saba Bank for most of her time in the Caribbean. In the last weeks of her journey, the ship made recordings around Aruba, Curaçao and Bonaire that were mainly focused on the ports and the associated approach routes used by ships.

Zr. Ms. Snellius assisted in this humanitarian mission by mapping the waters around various Bahamian ports. This guaranteed that the approach routes were clear for Zr. Ms. Johan de Witt’s landing craft to bring vital supplies on shore safely.

Zr. Ms. Snellius has advanced sonar equipment that can be used to map the sea floor. “In this way, nautical charts can be made and coastal areas can be mapped. The Dutch Navy thus contributes to the safe navigation of the waters of the Dutch Kingdom,” said the Royal Dutch Navy in a press release on Tuesday.