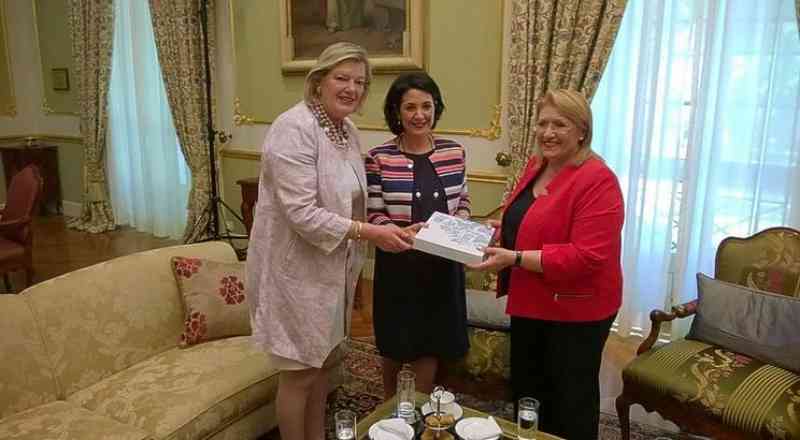 THE HAGUE–Presidents of the First and Second Chambers of the Dutch Parliament Ankie Broekers-Knol and Khadija Arib will start their week-long visit to the Dutch Caribbean in St. Maarten on January 6.

The visit to the Windward Islands from January 6 to 9 will focus on the destruction caused by Hurricanes Irma and Maria, and the reconstruction activities that are being carried out on St. Maarten, St. Eustatius and Saba.
In St. Maarten, the Presidents of the Dutch Parliament will be received by Parliament Chairperson Sarah Wescot-Williams. She will guide Broekers-Knol and Arib during an island tour on Saturday, January 6.
On Sunday, January 7, the Dutch delegation travels to St. Eustatius where they will be met by Acting Island Governor Julian Woodley. Part of the programme includes a meeting with the Executive Council and the Island Council, as well as an island tour. During this tour, the Presidents of Parliament will visit several reconstruction projects.
On Monday morning, January 8, Broekers-Knol and Arib will be in St. Maarten again where they will meet with Governor Eugene Holiday and visit several locations, including the White and Yellow Cross.
On Monday afternoon, they will travel on to Saba where they will be met by Island Governor Jonathan Johnson, and have meetings with the Executive Council and the Island Council. The following day, on Tuesday, January 9, they will make an island tour and meet with representatives of social organisations.
On January 10, the delegation visits Curaçao. Meetings are scheduled with Governor Lucille George-Wout and the Council of Ministers. They will also be received by a delegation of the Curaçao Parliament, followed by an island tour and a visit to the Curaçao harbour.
On January 11, the Presidents of Parliament will be in Bonaire where they will be received by Island Governor Edison Rijna. Here too, there will be an island tour and meetings with the Executive Council and Island Council.
Aruba is the last island that will be visited. Governor Alfonso Boekhoudt will receive the delegation on January 12, followed by a meeting with President of the Aruba Parliament Juan Edberto “Ady” Thijsen and the leaders of the parties in Parliament. The visit to Aruba will be closed off with an island tour.
Broekers-Knol has visited the Dutch Caribbean once before in her capacity as President of the First Chamber. For Arib, this will be the first official visit to the islands since she became President of the Second Chamber in January 2016.
Coincidentally, a delegation of the Permanent Committees for Kingdom Relations of the First and Second Chamber will be visiting Aruba and Bonaire. The delegation will be in Bonaire on Sunday, January 7 and Monday, January 8 for a working visit.
The Parliamentary delegation will meet with Island Governor Rijna, Acting Kingdom Government Representative Jan Helmond, the Executive Council and the Island Council. Also on the programme are a breakfast with the Council of Children, a meeting with social organisations and a visit to the agricultural project Krusada.
From Tuesday, January 9, through Thursday, January 11, the Parliamentary delegation will take part in the Inter-Parliamentary Kingdom Consultation IPKO, in Aruba. Representatives of the three Dutch Caribbean Parliaments will be in attendance for the three-day meetings which are held twice a year.