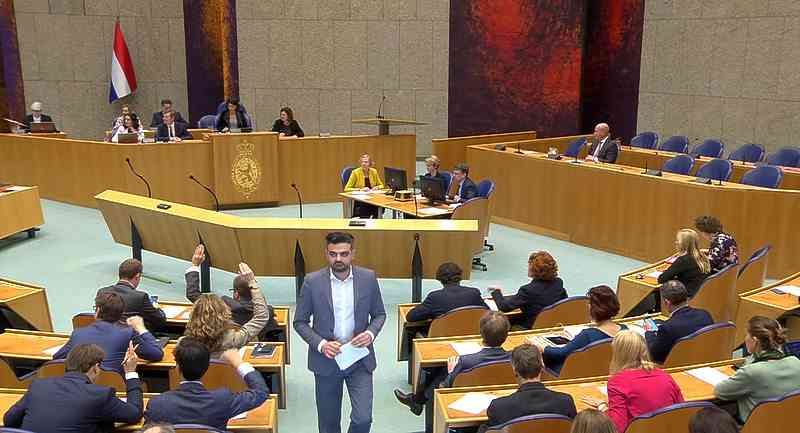 Tunahan Kuzu (centre) after his voting declaration in the Second Chamber.

THE HAGUE–The Dutch Parliament’s Second Chamber on Tuesday officially and unanimously approved the proposal for direct intervention in the St. Eustatius Government, sending home the Island and Executive Councils. All members voted in favour of Dutch State Secretary of Kingdom Relations Raymond Knops’ proposal, paving the way for it to be discussed by the Dutch First Chamber or Senate later in the day.

As the proposal had been discussed in detail during the debate on Monday, most Members of Parliament (MPs) had no additional comments. The only exception was MP Tunahan Kuzu of the DENK party: “We struggle with the fact that there actually will be less autonomy on an Island that calls for more autonomy. This measure is already explained as neo-colonial behaviour on the Islands,” he said.

Kuzu also referred to a shared Dutch responsibility in creating the current situation. “We think it is important that we don’t ignore the role played by The Hague in creating this situation. The State Secretary should have been clearer about the criteria for a return to a normal, workable situation. Nevertheless, we will vote in favour of the intervention as the only possibility to act in the interest of the people of Statia and the rule of law,” he said.

The Senate was to discuss the proposal later on Tuesday, immediately followed by a vote (see related story).