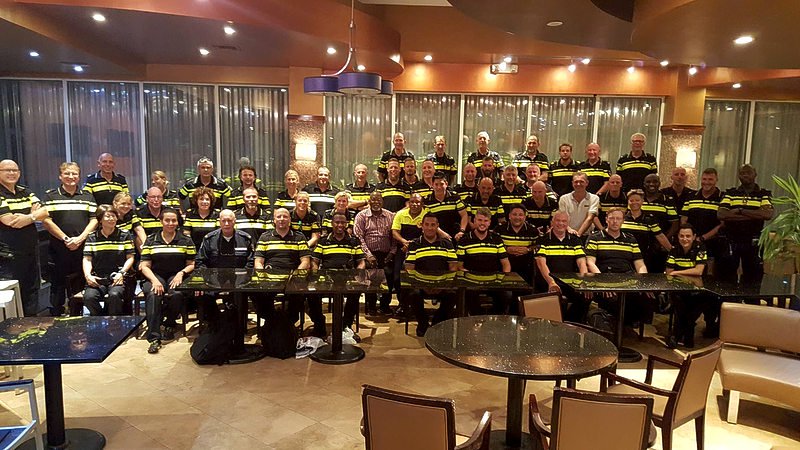 “The need to have police officers there is clear,” Knops said during the TV show “WNL on Sunday.” He said that formally the Dutch police officers, 70 of whom were sent to St. Maarten to assist with public order and safety after Hurricane Irma, would have to return to the Netherlands per January 1. Of the 70 police officers who were initially sent, 49 are still working on the island.
However, Knops said he would talk with his colleagues about the possible need to have the police officers stationed in St. Maarten for a while longer, also taking into consideration that elections are taking place in St. Maarten late February.
“It is possible that the police officers will be needed to stay longer to help maintain stability,” he said.
Knops said this would be one of the topics that would be discussed during his visit to St. Maarten on November 27. He said he would not only talk with local Government officials about the reconstruction phase, but also with organisations and the private sector.
“The most important thing is to start with the reconstruction, which is very much needed to get the economy moving and to get the tourists back. And even though the Royal Dutch Airline KLM has resumed its flights, the images don’t give the impression that St. Maarten at this time is a vacation paradise,” he said.
Knops emphasised that the Dutch Government was very much willing to assist with the reconstruction, for which 550 million euros has been reserved, but that the St. Maarten Government had to approve two conditions: the establishing of the Integrity Chamber and the reinforcement of the border control by Dutch military police, the Royal Marechaussee.
He said that unfortunately there was still “political fuss” about the conditions. “I am of the opinion that the Government there needs to take responsibility and do what is necessary to help their people,” he said.
Asked by “WNL on Sunday” host Rick Nieman about the general lack of trust between the Dutch and St. Maarten Governments, Knops said that based on events in the past, he was “very alert” about the spending of Dutch aid. “I am not naïve. We will use the Dutch taxpayers’ money in a good manner to help the people there, not the politicians,” he said.
He called the political situation in St. Maarten “complex” and referred to the many changes in government and some politicians who had been prosecuted. He did say that corruption happened everywhere in the world, not only in St. Maarten.
Knops stressed that strict control on the reconstruction funds was highly necessary, also because it was a lot of money for a small country like St. Maarten. He said that most probably the World Bank would be closely involved in the coordination of the Reconstruction Fund, because it has a lot of experience and because of the limited Dutch capacity.
knops Secretary reiterated the support of the Dutch Government for the St. Maarten people in these difficult times and to ensure that the reconstruction would take place in a sustainable manner to prevent large-scale destruction by a next hurricane.
“We feel responsible to assist the people in the Kingdom. We want to reward the good people, but people who think they can use the occasion for their personal gain are at the wrong address,” said Knops.