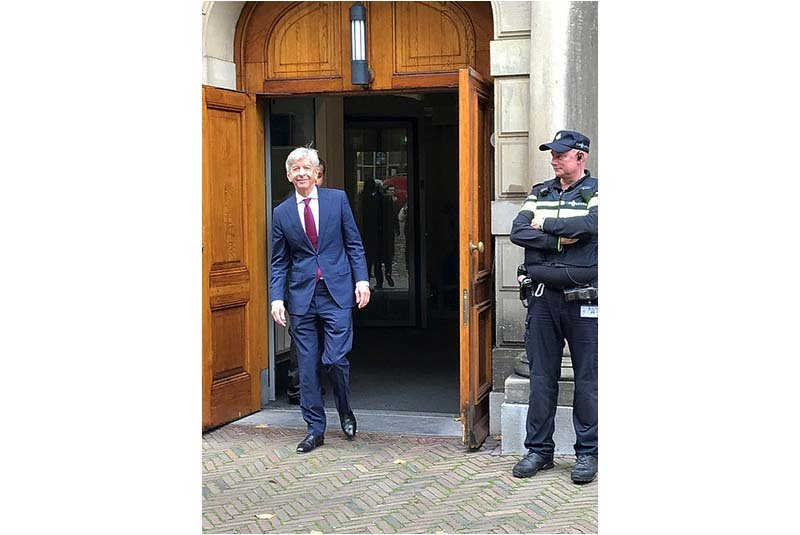 THE HAGUE–No General Measure of the Kingdom Government for St. Maarten for now, but The Hague is urging Philipsburg to agree with the Dutch preconditions before October 31. By this date, the Integrity Chamber should be secured by national law and an arrangement made to have the Dutch Royal Military Police and Dutch Customs carry out the border control under local authority.

Dutch caretaker Minister of Home Affairs and Kingdom Relations Ronald Plasterk made clear in a letter that he sent to the St. Maarten Council of Ministers on Friday that the Netherlands has set a deadline for the St. Maarten Government to agree to the Dutch preconditions for the granting of funds for the reconstruction: October 31.

In his letter, of which copies were sent to the Dutch Parliament, St. Maarten Governor Eugene Holiday and Minister Plenipotentiary of St. Maarten Henrietta Doran-York, Plasterk explained that the Netherlands was very much willing to contribute to the reconstruction in the coming period, but that it was a prerequisite to arrive at an agreement about the Integrity Chamber and the border control.

“If your government agrees on the preconditions, the Dutch Government is willing to set up a fund with a substantial financial contribution for the reconstruction, which will keep a future perspective for the St. Maarten people,” stated Plasterk, who wrote that he had been in contact with St. Maarten Prime Minister William Marlin by telephone on Friday.

Plasterk reiterated that it was necessary that the financial means were utilised in a manner that best served the interests of the people. “This means that the projects have to be executed in an integer manner. The Dutch Government considers it indispensible that an Integrity Chamber is established. Also, a well-functioning, decent and uncompromised border control is imperative. Especially in crisis situations and in times of reconstruction, border control is extra vulnerable.”

Not only should the St. Maarten Government agree with the preconditions before October 31, but by that date the St. Maarten Parliament should have approved the National Ordinance to establish the Integrity Chamber and the Governor must have proclaimed this law. This is to “avoid unnecessary delay” in the reconstruction, stated Plasterk.

The National Law should contain a “number of elements” that were not included in the draft version currently on the table, but on which the two governments had reached an agreement in the past, the Minister noted.

“These elements include the involvement of the Kingdom Council of Ministers and the Dutch Council of Ministers in the appointment of the chairperson and a member. Also, the Integrity must be able to provide binding advice from which deviation is only possible with a decent motivation. Sufficient budget and personnel is important as well.”

St. Maarten and the Netherlands had already arrived at an agreement at the Council of State early July this year that the St. Maarten Government would “promote” to have a new national ordinance for the Integrity Chamber approved by the St. Maarten Parliament no later than October 31, and that the new law would include the objections of the Constitutional Court to the initial law.

In relation to border control, Minister Plasterk reiterated that The Hague found it imperative that the quality of the border control on the island was beefed up “substantially,” because in the opinion of the Dutch Government, St. Maarten was currently “insufficiently able” to guard its borders on its own.

According to the Minister, especially the heavy drugs and weapons crime, migration crime, the influx of illegal labour migrants, and an uncontrolled flow of money and goods posed a threat to the border security. It is also important to improve the tenability of the border control in light of international terrorist threats.

The Dutch Government wants to come to a binding arrangement with the St. Maarten Government which states that the Royal Military Police (“Koninklijke Marechaussee”) and the Dutch Customs will carry out the border control, under the formal responsibility of the St. Maarten Justice Minister. This agreement will “promote a decent and speedy” reconstruction, Plasterk stated.

The Minister emphasized that it was only possible for the Netherlands to give a financial contribution for St. Maarten’s reconstruction after these preconditions had been complied with. The letter provided no amount for this fund, but Plasterk mentioned to reporters on Friday that it involved several hundred million euros.

Meanwhile, the Kingdom Council of Ministers decided on Friday to detach St. Eustatius and Saba from the Windward Islands reconstruction plan and to arrange a separate fund for these two islands.