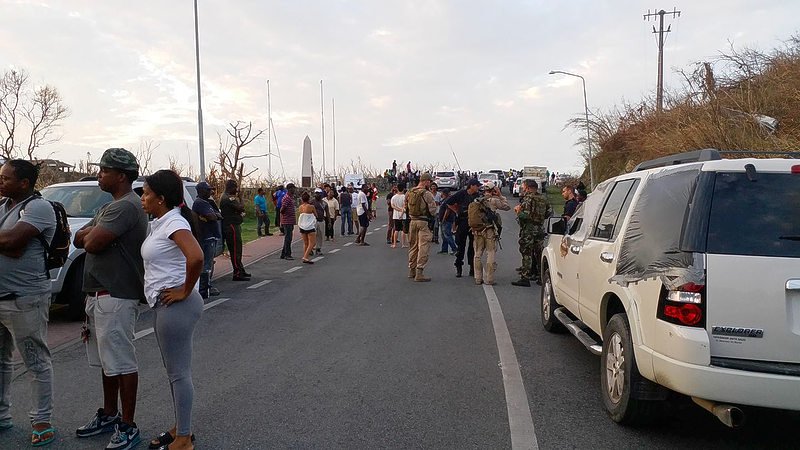 PHILIPSBURG–The borders linking Dutch St. Maarten to the French side of the island were ordered to close by Prime Minister William Marlin last week, according to officers guarding the border crossings on Friday.

The border blockage was lifted recently and residents can now travel to both sides of the island without being stopped. The Daily Herald contacted the disaster media committee consisting of media services within government.

No answer was immediately provided, however the government of the French side said they were not aware of any closure of the borders. Containers had been placed at the borders and persons were turned back until further notice.

Some concerned citizens took to social media and said, “Experienced BORDER CONTROL this evening (Friday), I wanted to see my mom and take some water to her at the end of my very long and exhausting work day. I was told by the Dutch that if I go to the French side (French quarter) that I couldn’t come back without my ID.

“He asked my nationality and I was like I’m Dutch…i was so proud to say thathttps://www.facebook.com/images/emoji.php/v9/f2/1/16/1f60d.png” >? (I didn’t realize at the time I had my Dutch ID in my possession). I was like, sir it’s right around the corner. He said this is a legal border. I pulled over to turn around and realized I had my Dutch ID and that’s how I passed from Dutch Quarter to French Quarter to see my mom. By the time I got back like half hour later…. pffft they weren’t even there to check me.

“It wasn’t a nice feeling. For us staying back and rebuilding our island, this is not a nice experience. I felt betrayed and hurt at the same time. Whoever needs to fix this please fix it. Some of us have families on both sides. I for one grew up French side all my life. I attended primary school in Grand Case for crying out loud. Had the privilege to attend high school on the Dutch side, working and live Dutch Side, however will forever be a Colombier/ Rambaud girl for life. This is not time to divide us,” stated one of the many concerned citizens.

Luckily the borders are now clear and persons are free to go to any side of the island.