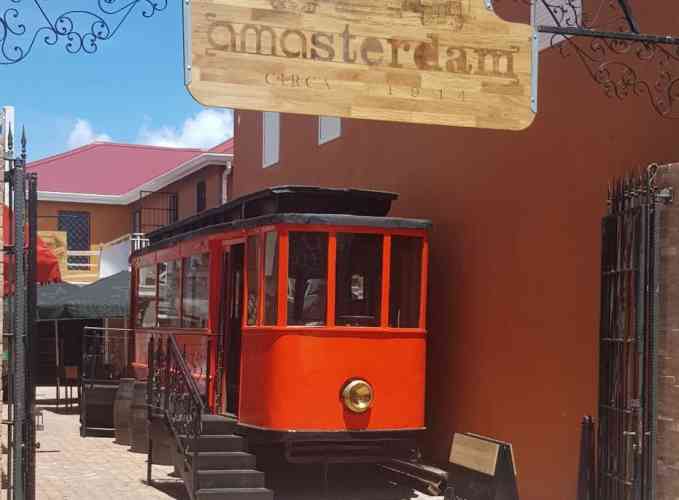 A view of the entrance.

PHILIPSBURG–Government recently approved a pilot to open a real Dutch “coffeeshop” in Philipsburg like many of those found in Amsterdam for years already that sell soft drugs and have proven a success in attracting lots of tourists. “And that is what we need now,” it was argued during a presentation for stakeholders. “We have to do anything to get visitors back to the island.”

In good collaboration between the Ministries of Tourism, Health and Justice, provisional permission per April 1 for a maximum test period of one year was granted. The adults-only business will open its doors today, Monday, with a special introductory offer.

This project was awarded to a new establishment called AMAsterdam Cafe, next to AMA Jewellers at 24 Front Street, and will be evaluated in the beginning of 2020. The start-up has been given 12 months, but it can be terminated earlier if things do not work out or authorities are forced to deal with too many complaints.

On the other hand, the possibility exists of more permits being issued in the future, should the project turn out to be a success.

One major condition from the police was that the marijuana and hashish products to be sold can only be consumed on the premises, to prevent problems with, for example, cruise passengers boarding their ship with drugs that remain illegal in the rest of the country. Government inspectors will be actively enforcing this rule.

Law enforcement officials initially had serious reservations about the idea. However, they were persuaded that especially since Canada legalised the personal cultivation and recreational use of cannabis per October 17, 2018 (its medical use had been legal there since 2001) it was worthwhile to try a pilot.

To celebrate the opening, starting at 10:00am until 2:00pm people can come by and try one free “drag” of smoke or “hit” from bongs with changeable individual mouthpieces much like a “hookah” waterpipe, as this minimal quantity will not bother first-time users but still give them a rather light and innocent feeling or sensation of “being high.”

Those responsible did not go as far as allowing weed to be grown locally or bought on the existing illicit market, so the products being sold are exclusively imported for AMAsterdam from Canadian company Medreleaf Inc. that obtained a licence for cannabis from the Canadian government in 2014. This company is supervised by the International Narcotics Control Board.

Under the import and export laws of Canada the shipments of cannabis to St. Maarten are under strict surveillance of Canadian as well as local Customs.

Arun Bijlani, owner and director of AMAsterdam Café, was very pleased with the approval after many years of lobbying with many different ministries. He

said: “Tourists and residents can buy and enjoy marijuana, weed, hash, grass, pre-rolled joints and space-cakes in a pleasant and safe environment. Prices vary by quantity and quality. Our staff is trained to assist you on the particularity of each type and the effects you might experience.

“We welcome everyone to come out and enjoy a free sample on Monday. As of now, any person 18 years old and above may enter the coffee shop. Your ID may be required to check your age.”

Nightlife business hours to be scaled back to 11 pm. |...