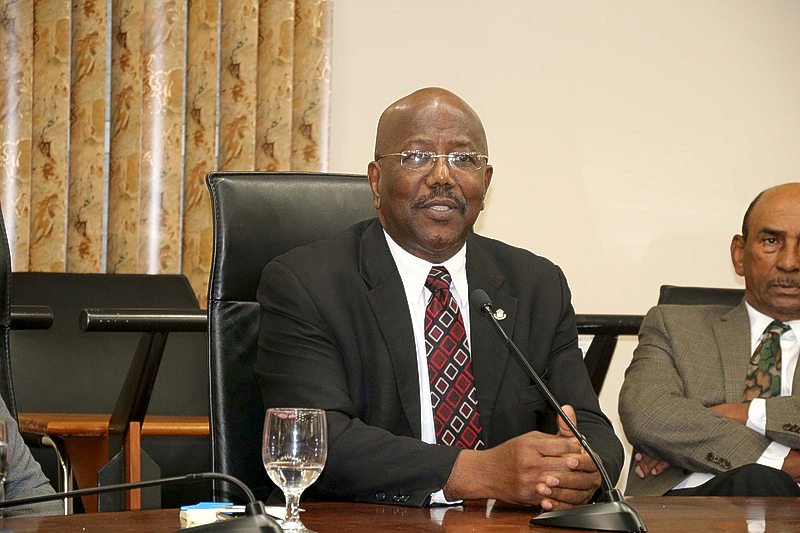 PHILIPSBURG–Prime Minister William Marlin said on Sunday following a phone call from Dutch Minister of Kingdom Relations Ronald Plasterk that it is not right for the Dutch government to hold the people of Sint Maarten hostage over the issue of establishing an Integrity Chamber controlled by the Dutch and reporting to the Dutch.

“If the Integrity Chamber is not accepted, Plasterk said, there will be no aid from the Netherlands,” Marlin stated in his press release.
In the present draft legislation currently being advised on by the Council of Advice, the board of the Integrity Chamber should consist of three persons nominated by the Court of First Instance, the General Audit Chamber and the Ombudsman. “This is unacceptable by the Dutch government, according to Plasterk, as they do not trust the local institutions,” said Marlin.
Marlin pointed out that there are no reasons to not trust the local authorities and the position by the Dutch is not fair and unacceptable.
In his letter to the Sint Maarten Council of Ministers on Friday, October 13, Plasterk had pointed out that the National Law establishing the Integrity Chamber should contain a “number of elements” that were not included in the draft version currently on the table, but on which the two governments had reached an agreement in the past.
“These elements include the involvement of the Kingdom Council of Ministers and the Dutch Council of Ministers in the appointment of the chairperson and a member. Also, the Integrity Chamber must be able to provide binding advice from which deviation is only possible with a decent motivation. Sufficient budget and personnel are important as well,” Plasterk had written.
There is no money set aside for the establishment of the Chamber in Sint Maarten’s 2017 budget, The Dutch have offered to supply the funds for the Chamber.
“According to Plasterk, the Dutch are concerned that large sums of money will attract criminals and Integrity breaches. This also does not make sense,” according to Marlin, as his Government has indicated from the onset that the Dutch Government does not need to transfer hundreds of millions of dollars or euros to St Maarten.
“The Dutch Government not only has the possibility, but is encouraged to set the conditions under which the different projects will be funded. The St Maarten Government is also encouraging the Dutch Government to have the Dutch Audit Chamber carry out an audit on the money trail for every euro they spend,” the Prime Minister stated.
As far as Marlin is concerned, the fund is not established as soon as possible.
Marlin said no aid amount has been mentioned and it has not been made clear what part of it would be a grant and what part a loan. Plasterk replied to that by saying that no amount will be made known unless Sint Maarten accepts the two conditions.
Marlin said his Government is willing and prepared to talk about the fund, the conditions and the mechanisms to ensure that the monies are spent in accordance with proper rules of transparency and accountability. “For Plasterk, none of this will take place unless the Sint Maarten Government accepts his two conditions.”
“This is unfair and not right,” Marlin said adding that he hopes the Dutch Government will agree to negotiate fair and square.
Marlin said the European Union is also willing to provide aid to St Maarten and it has its rules of transparency and accountability which will be enforced. “The Dutch government can do the same, actually this was done after Hurricane Luis in 1995,” he said. During that period, Marlin said, he was Commissioner of Housing and the system worked well.
Marline wants to make it clear that the conditions set by the Netherlands have nothing to do with providing aid. The impression is wrongfully being created by the Government in The Hague that St. Maarten is against establishing an Integrity Chamber. “Many in Sint Maarten are therefore asking the question what it is the St Maarten Government has to hide or what is it the Government is afraid of,” he said.
Marlin has pointed out to Minister Plasterk that his Government has already taken the initiative to prepare the draft legislation to establish the Integrity Chamber and that the draft was sent to the Council of Advice via the Governor in September. Plasterk is aware of this and knows that because of the hurricanes the Government of St Maarten is unable to meet the deadline of October 31.
There are some who are trying to misuse this situation for their own political agendas, Marlin said. “St Maarten is a young, seven-year-old country in the Kingdom of the Netherlands and we have a Constitution that we all, Ministers and Members of Parliament, have taken an oath to uphold and defend,” he said.
Marlin and Justice Minister Richard Gibson will elaborate further on Government’s position at a press briefing scheduled for today, Monday, October 23.