Home Local News E360 presents Together We Rise for Carnival 2018 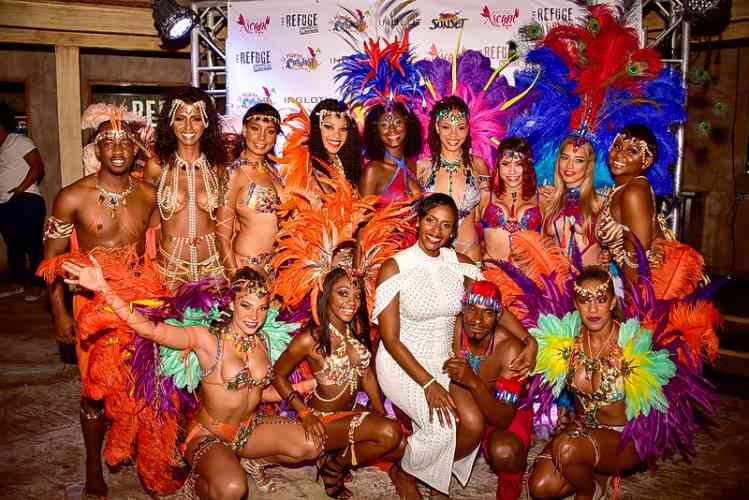 Xscape the Band/E360 Productions crew with models on Saturday.

MAHO–Reigning winners for Best Carnival Troupe in 2017 E30 led by Erica Fortuno is back with a four-section troupe named Together We Rise after St. Maarten’s national symbols. The launch of the colourful costumes took place at Refuge next to Sunset Beach Bar on Saturday.

Xscape the Band/E360 Productions will take part in this year’s Carnival Grand Parade in April. Each section of the troupe features a backline, midline, frontline, men and Individual options with upgrade options available.

“We have scaled back on the size of our pieces a bit with the masquerade in mind, while maintaining our brand’s quality to ensure pricing is affordable for all. If persons would like to go bigger, we encourage them to enquire about their options,” said Fortuno on Saturday.

This is E360 Productions’ third year presenting its own troupe, but Fortuno has been assisting and collaborating in Carnival troupes for the past eight years.

Registration is open and costumes can be viewed at their mas camp in Cay Hill. According to the band leader, Xscape the Band will be promoting National Pride given the devastation the island went through post-Hurricane Irma.

Fortuno has joined forces with one of the largest bands out of Barbados – Krave the Band. “Krave the Band is not only known for their quality, but also their production and epic road experience. As such, they have chosen to work with Xscape the Band because we promote excellence,” Fortuno said.

“Krave will have a section within Xscape with the goal in mind of taking SXM Carnival Global. We welcome Krave the Band to St. Maarten! We look forward to having you on the road with us for yet another epic experience.

Pelicana symbolises the Brown Pelican, which is the national bird of St. Maarten and is featured on both the coat of arms and the St. Maarten flag. They are a common sight on the island, resting in Great Salt Pond, near the docks and gliding in the clear blue skies.

Guavaberries section is for the indigenous Sint Maartener, Guavaberry conjures up warm and treasured memories of the good old days. There are folk songs and stories about it. Guavaberry is an integral and distinguishing feature of the local culture, heritage and tradition. A point of pride, a symbol of Sint Maarten/St Martin, a living link to the past.

The Soualiga section was inspired because legend says that St. Maarten received its name from the day Christopher Columbus landed on the island: on November 11, 1493. However, in the 14th century the cannibalistic Carib Indians and the Arawak Indians called the island Soualiga, which means “Salt Island,” due to its main mineral deposit.

The Lantana section is all about orange – yellow sage (Lantana camara), which is the island’s national flower. Although common throughout the West Indies, the lantana is a very important part of the island’s culture, gracing the national flag with its beauty.

Fortuno thanked everyone who came out to support the event on Saturday, especially designer Rawle Permanand and Krave the Band.