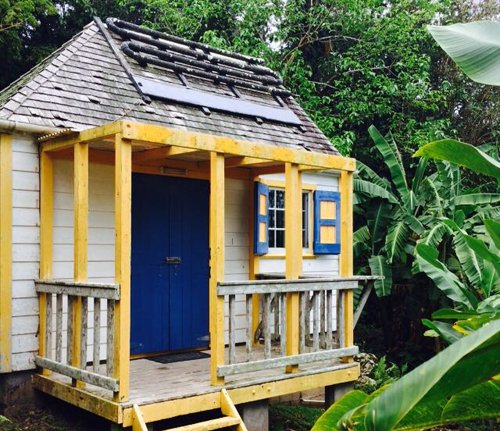 The real estate agency on Saba proudly announced the sale of the resort on its website. The new owners were not identified and the selling price not made public, but the Ecolodge was listed at an asking price of US $650,000.

The resort opened in 2002, but was confronted with rough financial weather. Crowdfunding and fundraising barbecues were held to prevent foreclosure in early 2015.

Albert Pensis and Michael Feeley assured that the resort and its renowned Rainforest Restaurant will be preserved and upgraded by its new owners, “honouring its unique environmental purpose while aiming to make Saba a world class eco-tourism destination.”

“When we showed Ecolodge to the new owners they instantly connected with it. They saw its value, respected its meaning and fell in love with its possibilities,” the two realtors said.

They assured that the new owners intend to keep the eco-friendly concept of Ecolodge intact while adding comfort and style to the 12 individual cottages and restaurant. “Lots of real plans to refurbish the buildings and restaurant are in process,” Pensis and Feeley said.

Ecolodge was created by conservationist Tom van ‘t Hof and artist Heleen Cornet. “The area has always been known as Rendez-Vous, supposedly because this is where people would gather in case of a hurricane or calamity,” Van ‘t Hof said on Saba Island Properties’ website.

“The original concept was to offer off the grid access where guests would sacrifice a bit of comfort for close proximity with nature…At Ecolodge you see people enjoying themselves. They are happy and this is the most rewarding experience you can have as an owner. I hope the new owners will give it the constant attention and work it needs and above all, love,” he stated.

The real estate agents said that one of the things they are proudest of in selling Ecolodge was finding the right people who understood its value and founding principles. The resort’s new owners were not immediately available for comment.
Source: Daily Herald
Ecolodge Rendez-Vous sold to new proprietors