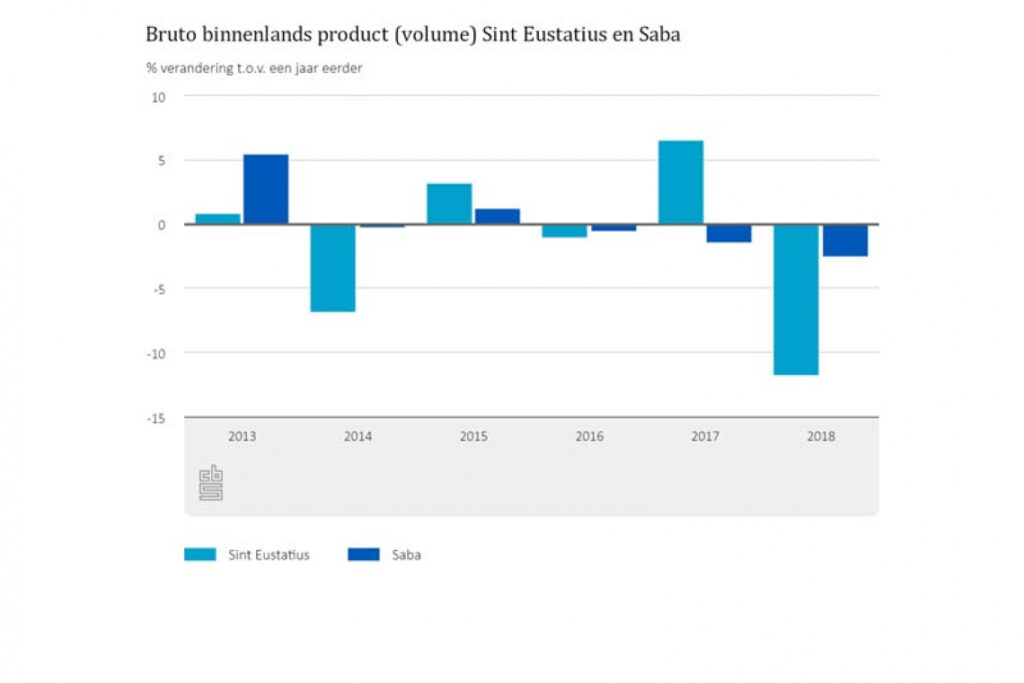 BONAIRE–Bonaire’s gross domestic product (GDP) increased by 3.9 per cent in volume in 2018, while St Eustatius recorded a contraction of 11.8 per cent and Saba’s GDP declined by 2.5 per cent, Statistics Netherlands CBS reports based on newly-released figures.

The value added by the accommodation and food services sector in Bonaire rose by 19.3 per cent. This made it the fastest-growing sector in 2018, together with financial institutions. The growth in accommodation and food services is associated with the opening of new hotel and catering establishments in that year. The number of incoming air passengers and cruise tourists also increased, by 10 per cent.

There were many construction projects in Bonaire in 2018. Construction output rose by more than six per cent. Because intermediate consumption (goods and services used in the production process) rose less rapidly in this sector, the value added increased by 13 per cent.

Demand for housing is high in Bonaire, which is also reflected in the number of transactions as well as house prices; in 2018, these rose by 52.8 and 21.6 per cent, respectively. Real estate agents and landlords benefited from this. The value added of the real estate sector increased by 9.5 per cent.

Business services also benefited from the strong housing market. In addition, car rental companies in this sector recorded growth due to the increase in tourism.

There were also sectors that performed less well in 2018. The value added of the transportation, information and communication sector fell by 15.5 per cent.

This decline was caused by only a few large companies that operate in the transportation and storage of goods. These companies were negatively affected by developments in the regional oil market. The remaining companies in this sector performed well in 2018. The decline in the agriculture and mining and quarrying sectors was also attributable to one large company.

The contraction in St. Eustatius by 11.8 per cent was related to a few large companies on the island. Their production is mainly export-oriented and dependent on regional developments in the oil sector. In addition, they were affected by the consequences of Hurricanes Irma and Maria, which moved along the Windward Islands in September 2017.

In Saba, the contraction was caused by the effects of Hurricanes Irma and Maria. Inbound tourism by sea and air dropped by nearly 16 per cent in 2018. This diminished the value added of the accommodation and food services sector. The education sector showed a decrease in value added as well, due to a declining number of students in 2018 compared to 2017.

Revisions have taken place in the GDPs of Bonaire, St Eustatius and Saba this year. These have resulted in an upward adjustment of GDP on all three islands.

This is the first time that CBS – since the start of GDP measurements in the Caribbean Netherlands in 2014 (for reporting year 2012) – has carried out GDP revisions.

There are three reasons CBS has carried out revisions this year:

A greatly improved business register which includes all enterprises that carry out economic activities on the islands has become available during the course of this year. The register contains e.g. the sector (SBI 2008, an international standard classification of economic activities) and the number of persons employed per company.

Collaboration with the Caribbean Dutch tax authorities has been intensified in recent years, which has improved access to the financial data of local enterprises.

The sampling and upward revision method has been improved this year.

The revision has been carried out for reporting year 2017. This means that a new GDP level has been set for all three islands for 2017. Subsequently, changes in the value and the volume of GDP prior to revision were used to calculate new GDP values in both current and 2017 prices for the years 2012 through 2016.

For Bonaire and St Eustatius, the revision has led to a substantial upward revision of GDP in 2017: by US $52 million and $34 million respectively. The adjustment on Saba amounts to $1 million.

The reason for the major GDP revisions for 2017 is that the GDP was calculated in a completely different way before revision. In 2012, CBS determined the level of GDP for all three islands based on the sources available at that time. In the following years (2013-2017), GDP was calculated by putting the developments from the sources at the level of the GDP of the previous year.

However, as the sources have improved significantly over the past six years, the level of GDP increasingly deviated from the sources. After the revision of GDP for 2017, GDP has been re-aligned with the levels of the sources.