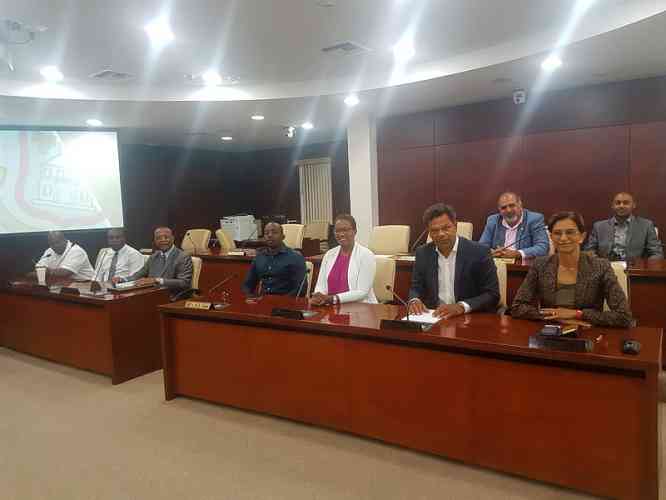 PHILIPSBURG–The results of the February 26 snap elections were validated today by the Central Voting Bureau, paving the way for the newly (re)elected Members of Parliament to take the oath of office before Governor Eugene Holiday on April 2, Easter Monday. The current Parliament will be dissolved on that day.

Ten of the 15 MPs-elect met with the Voting Bureau after its public sitting in Parliament House to receive the letter informing them of their election to the legislature. Several MPs submitted their response letter accepting their seats immediately.

Earning a seat as they had in past elections are former Ministers Silveria Jacobs, William Marlin and Christophe Emmanuel (NA) and Emil Lee (United Democrats). These MPs-elect earned seats in the 2016 snap election, but had opted to serve as ministers. The Constitution does not allow the posts of minister and MP cannot be held in tandem.

Prior to the meeting with the MPs, the Voting Bureau announced the changes to the vote tallies of the six parties that contested the election and formally announced the names of the 15 MPs-elect. That came after total recounts of three polling stations, partial recounts of six and the review of all invalid ballots were carried out on Monday and Tuesday. This review process is part of the country’s electoral law and process.

The number of valid ballots cast in the election, the second one in 17 months, was logged at 13,607. The preliminary tally on election night was 13,553. The increase of valid ballots changed the seat quota to 907 votes, up for 904. This slight change did not affect the seat allocation as announced – seven for the United Democrats, five NA, two for US Party and one for SMCP.

Twelve of the 15 seats were earned outright by the four parties. The remaining three seats for allocated based on the residual seat formula are outlined in the electoral law. These seats referred to as “restzetel” in Dutch are awarded to a party based on proximity to its next seat taking into consideration its votes and the established seat quota.

Based on the formula, the first restzetel was awarded to the US Party, second to NA and the last one to the United Democrats.

Of the 15 MPs-elect, Heyliger was the only one to earn his seat outright. He received 1,299 votes, more than the established seat quota. He was once again the highest vote-getter overall of the 93 candidates in the election.

While the 15 MPs-elect represent the highest overall voter getters in the elections, the three lowest vote-getters were Lucrecia “Loekie” Morales with eight voters, Armando Gumbs (seven) and Frits Richardson (PPA), and Early Charlemenge (US Party) with four votes each.

Voting Bureau Chairman Jason Rogers thanked everyone who contributed to the smooth election process. He made special mention of the people managing the country’s dumps who were on alert in case fire again broke out as it has intermittently since the end of January.

“We had a ‘Plan B’ in the event of the fire. We wanted to ensure the election process was not hampered,” he said at the close of the public session.