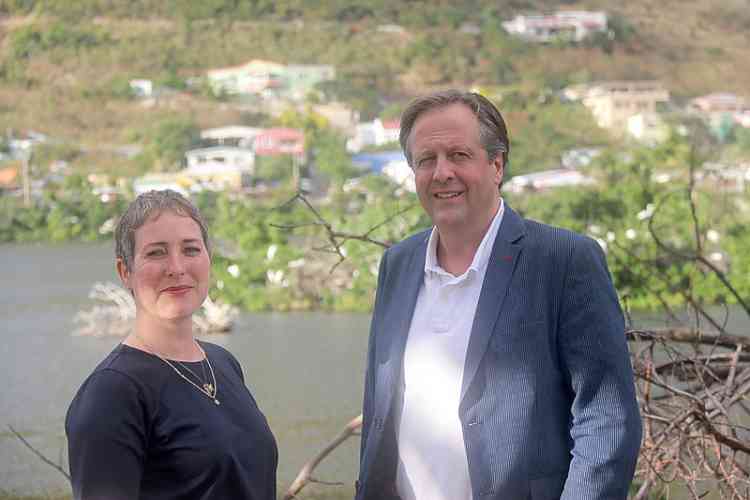 PHILIPSBURG–Monday’s parliamentary election passed without flaws or incidents, Members of the Dutch Parliament Alexander Pechtold and Meta Meijer said. According to the two Dutch observers, their presence was much appreciated by voters.

Pechtold, who is leader of centre-democrat D66 party and Chairman of the Permanent Committee for Kingdom Relations of the Dutch Parliament’s Second Chamber, and Senator Meta Meijer for Socialist Party (SP) both took part in an international team of observers during Monday’s election.
Both said the snap election was well organised, especially in view of the short term in which it had to be organised. “The election was fully transparent and correct. We are really impressed,” said Meijer.
“Also, the public was very positive,” said Pechtold, who stated that the observers were free to have a look everywhere and were able to speak with many voters.
The recommendations to the St. Maarten Government will only address “minor details,” according to the Dutch observers.
It was the first time the Dutch Parliament sent observers to an election on one of the Dutch Caribbean islands. St. Maarten’s Interim Government on February 12, filed a formal request with the Dutch Government to have election observers present.
Pechtold and Meijer, who arrived on the island Saturday, were part of an international group of nine observers which also consisted of representatives of the Organisation of American States (OAS), the International Foundation for Electoral Systems (IFES) and the Civil Registries of Aruba and Curaçao.
On Sunday, the observers were briefed by the Electoral Council about the election process. “The full-day briefing was quite tiring,” Pechtold said.
One day later, on Monday, the observers nevertheless were out and about as early as 6:00am to witness the transportation of election material and the opening of the polling stations two hours later.
Throughout election day all polling stations, including the one at Pointe Blanche Prison, were visited. The observers were also present when the polling stations closed and witnessed the counting of the votes until after midnight.
“There were sufficient ballots in place and the members of the voting bureaus were well- informed and trained,” Meijer said.
“I have not seen anything of which I thought: ‘Would you really have to do that this way?’ The members of the voting bureaus knew very well what their responsibilities were,” said Meijer, for instance where voter identification was concerned.
Meijer and Pechtold said they would recommend the Dutch Parliament to send observers to elections on all the Dutch Caribbean islands and to also invite observers from the islands during elections in the Netherlands.
“Of course, the scale of the Netherlands is much larger than on the islands, but we’re all part of one kingdom and we should be interested in each other’s democracies,” Pechtold said.
He said observing the St. Maarten election had been an “educational” experience. “Being able to have an inside view of the election process here has been food for thought. For instance, about the abundance of personal votes, the use of photos of candidates on the ballot paper, and about the position of ‘list pushers’, who are able to jump over candidates higher on the party list in obtaining a seat.”
On Tuesday, Pechtold and Meijer made a tour of the island and visited several organisations. Confronted with the damage caused by Hurricane Irma in September 2017, Pechtold said he was most impressed by the resilience of St. Maarteners.
“At first sight much has been cleared away but when you have a better look you can still see a lot of damage. The 550 million euros [in the Recovery Fund – Ed.] will be much needed,” Meijer stated.
“Let’s support the positive elements, but do not let that stop us from keeping pace, otherwise, you’ll be demotivating,” said Pechtold about the recovery efforts.