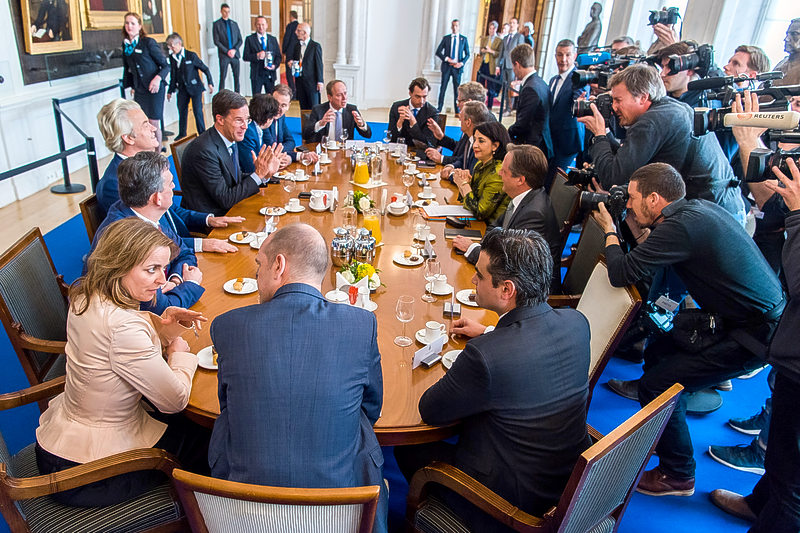 THE HAGUE–Wednesday’s elections brought major disappointment for two members of the Permanent Committee for Kingdom Relations of the Second Chamber of the Dutch Parliament: Committee Chairman Jeroen Recourt and Roelof van Laar, both of the Labour Party PvdA, were not re-elected.

The parties will decide at a later date on who to appoint to the different Parliamentary committees. As such, it is not certain which members will stay on in the Kingdom Relations Committee. Bosman, Van Raak and Amhaouch said on Thursday that they were available, not only because they feel committed but also because continuity is important.

The historic defeat of the PvdA was extra sour for Recourt and Van Laar, respectively number 23 and 45 on the PvdA slate. “It is very sad, but that is democracy,” said Recourt in a reaction on Thursday. “An exceptionally painful blow,” responded Van Laar, who opted to keep his comments more general.

“Our party has steered the Netherlands out of the crisis in a decent and honest manner. Our country is doing much better than in 2012. Still, we weren’t able to convince our voters with our results from the cabinet and the plans for the coming four years. Our confidence in our ideals and future vision remains intact. Together we’ll find new courage, energy and inspiration for the coming years,” said Van Laar about his party’s massive loss.

Recourt said that even though he would not be returning to the committee which he chaired for the past five years, he was happy to note that most likely some of the involved committee members would remain. He said that hopefully his party would maintain Kingdom Relations as a priority and appoint a new person to the committee within short.

Kingdom Relations, and especially the Caribbean Netherlands, should be an item in the formation talks of a new government, said Recourt. “There has to be ambition to do things right; to eradicate poverty, to set a social minimum and to establish the dispute regulation (“geschillenregeling”),” he said.

Bosman, who ran number 24 on the VVD slate, said he was happy with the election results even though his party has lost eight seats. He said he was content with the large support that the VVD got especially from voters in Aruba and Curaçao. He said he was certainly available to stay on in the Kingdom Relations Committee. “It is an important portfolio. I have a good network and I would love to stay involved.”

Bosman said he would like to continue the current course in the relations with the islands. “Treating each other with respect, but being strict where necessary. The finances have to be in order and corruption and bad governance have to be tackled. If that is not the case, the Kingdom Government will intervene,” he told The Daily Herald.

Leader of the Democratic Party D66 party Alexander Pechtold, who is a member of the Kingdom Relations Committee, is a happy man with 19 seats in the new Parliament and an increased number of D66 voters in the Dutch Caribbean. D66 was the biggest vote getter in St. Maarten, Saba and Bonaire.

“We have achieved a fantastic result. The constructive message of connection has won. For D66 this is second best election result of our party’s history, also thanks to the votes from the people of St. Maarten, Saba, St. Eustatius, Bonaire, Curaçao and Aruba. I want to thank everyone for their support,” said Pechtold in an invited comment.

“This is a great result,” said Amhaouch, number 15 on the CDA slate. He specifically congratulated Koos Sneek who ran on the CDA slate as number 49 in the electoral district Bonaire, St. Eustatius and Saba. “Thanks to him, we won in St. Eustatius. Koos has done a terrific job and I give him a big compliment for that.”

Amhaouch said that the support for the CDA on all the islands and in the Netherlands provided a basis of trust for the party to move forward to work in the best interest of everyone within the Kingdom. “The Kingdom consists of four countries and everyone is a part.”

Amhaouch assured that the CDA would stick to what it has promised in its party programme. “We will continue to seek attention for the Caribbean part of the Kingdom. There are important themes that need to be raised.”

“We are in for a cold, right-wing wind in the Netherlands, and that is not good for the islands,” said Van Raak, observing the higher number of seats of the PVV and the fact that the right-wing parties now have more seats in the Parliament.

Van Raak, who ran number four on the SP slate, said that his party remained committed to address the important issues for the islands, such as poverty and the social-economic development. “Naturally, the right-wing parties have a lesser interest in the islands; so it will be up to us, the left parties, to give the islands the necessary attention.”

In the past few years the interest for Kingdom Relation in the Second Chamber has dwindled to the point where often only two or three members would be present at meeting. This was much to the disappointment of Committee Chairman Recourt who has tried to increase the number of participating members.

“The relations with the Dutch Caribbean countries are important, but also with Bonaire, St. Eustatius and Saba for which we carry a special responsibility. The islands will get overshadowed by larger Dutch issues, that isn’t good for the islands which require special attention due to their extraordinary position,” he said.

Bosman agreed with Recourt on that aspect. “I haven’t heard those talks, but integrating Kingdom Relations into Home Affairs would, in my opinion, be unwise. It is a small but broad portfolio that requires having a network, being involved.”

Bosman said he hoped that all parties would actively take part in the Kingdom Relations Committee in the new Parliamentary period. “A number of parties have grown in size, so there should be enough persons to share the workload which will increase the chance of a larger input in Kingdom Relations.”

Van Raak, who is also a member of the Home Affairs Committee, said that his preference was to maintain Kingdom Relations as a separate committee, but he added, “There has been very low interest in Kingdom Relations. It depends on the interest shown by the new Second Chamber for this committee.”

However, there is also a task for the voters on the islands to keep their interests on the radar, said Roelof van Laar. Emphasizing that it was important for the islands, especially Bonaire, St. Eustatius and Saba, to let their voice be heard in the Dutch Parliamentary elections, he criticised the low turn-out in Bonaire and St. Eustatius where people were discouraged from voting.

“The low turn-out makes it less attractive for Members of Parliament to look out for the islands’ interests. Electorally it has to be motivating to do something for the islands. People need to cast their vote and reward politicians who care for the islands. As voters, you must create the energy so the Dutch politicians will work on your behalf; otherwise it will just come down to idealism of the Dutch parties,” said Van Laar.