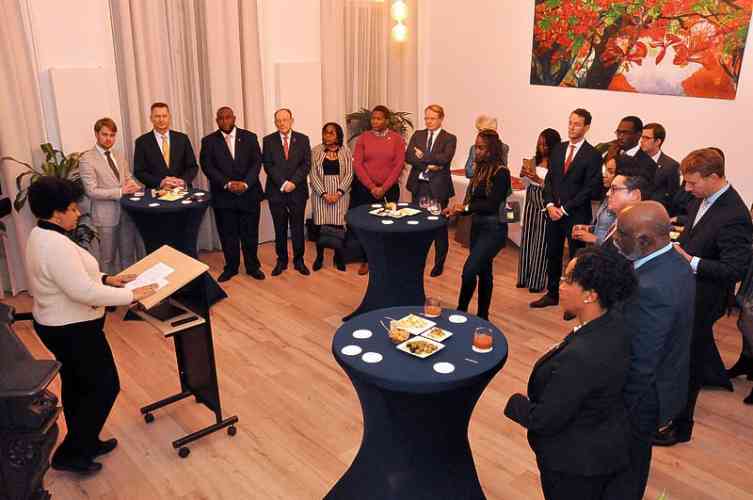 Ministers Plenipotentiary Raymond Begina of Curaçao and Guillfred Besaril of Aruba, Member of the Second Chamber of the Dutch Parliament André Bosman, Programme Director-General Recovery Windward Islands Hans Leijtens and the new Programme Director Recovery at the Ministry of Home Affairs and Kingdom Relations BZK Hans van der Stelt were among the 20 guests who attended the event. Also invited were a number of St. Maarteners living in the Netherlands.

In her brief address, Simmons referred to the great challenge that lied ahead to rebuild St. Maarten after Hurricane Irma and the positive, contributing role that the partners in the Kingdom have played to assist the island. “Let’s kick-start St. Maarten’s rebuilding. 2018 will be a year of recovery.”

Ellis thanked especially the Netherlands, but also Aruba and Curaçao, which came to St. Maarten’s aid after the hurricane. “The display of your kindness makes me reflect on our golden history of free movement within the Kingdom, uniting us in blood and culture,” said Ellis, who also thanked the many organisations and initiatives that helped out.

Ellis said he welcomed 2018 with an “ambitious outlook” for St. Maarten. “As a nation, we are confident in our ability to work hard in order to return to the days of our glory. People are looking to our leaders for that vision to rebuild the economic hub of the North-Eastern Caribbean,” he said.

The Deputy Minister Plenipotentiary said he was pleased to note that an agreement has been secured with the World Bank to execute the Recovery Fund for which the Dutch Government has reserved 550 million euros. “In the coming months we will be testing several programmes that are geared towards the restoration of the economy,” he said, expressing a “significant word of gratitude” to the Dutch Government.

The recovery programmes should result in higher standards for the public infrastructure. The natural environment should play an important role, because this is also in the interest of the island as a tourism destination.

Ellis named a number of social issues that he found unacceptable and which in his opinion need urgent addressing. “It is unacceptable that we have people working hard without adequate social services such as housing, education and welfare. Without a proper level of social services, we cannot expect the people to remain healthy and productive.”

The youth was a second great source of concern for Ellis. “It is not acceptable that we have many disenfranchised youngsters with untapped potential. We are losing them every day to crime, drugs and gangs. They need to return to school where they can participate and benefit from lifelong learning programmes and on-the-job training.”

Ellis announced the developing of a 2018 year plan by the Cabinet of the Minister Plenipotentiary which will address the transatlantic environmental, social and economic development gap between St. Maarten and the Netherlands.