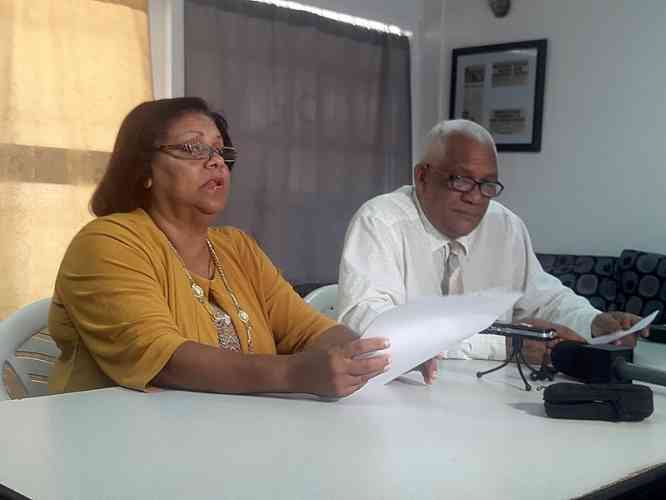 PHILIPSBURG–Windward Islands Teachers Union (WITU) president believes that the list of recommendations made by Education Minister Wycliffe Smith to help resolve the issues plaguing the Preparatory Secondary Vocational Education (PSVE) section of St. Maarten Academy are “workable” but she does not like the impression that she says was created by the minister that teachers don’t follow rules and regulations.

The union was expected to have a meeting with some of its membership on the recommendations on Thursday. The outcome of that meeting could not be ascertained.

WITU President Claire Elshot said in response to a question at a press conference on Thursday morning that she felt that the recommendations were largely positive, particularly as it concerned those made for the union.

She took issue with some of the recommendations made for teachers noting that a “take it or leave it” position was taken by the minister, which she felt was not warranted.

Elshot said this comment from the minister makes it sound as though teachers do not abide by the rules and regulations of the school, which she felt was not accurate. She said there are many things that teachers can bring to the table for solutions. If teachers are not consulted on issues then things won’t go right. “Teachers are human beings. It cannot be a take it or leave it attitude,” the union president stressed.

She believes that Smith’s recommendation that the Board hires a change management coach for the next six to twelve months is a good one as this would be an independent person. She, however, noted that the Board has already indicated that this is not possible as it is already working with two external consultants for the areas of finance and human resources and having a third person would not be feasible.

She stressed that the Board is direly in need of “new blood, adding that the board has forked out a lot of funds in court settlements for cases it has lost.

In his recommendations, Smith said the Foundation for Academic and Vocational Education (FAVE) should change its communication strategy towards the teachers and staff as well as with the WITU.

Earlier this year Smith intervened in a conflict between some PSVE teachers/staff and principal Lavern Nelson. The conflict escalated when several teachers called in sick for several days during the start of the new academic year in a form of silent protest. Smith had met with teachers, the principal and union and prepared a report on the matter. After meeting with all parties Smith said he concluded that “poor communication between all parties is the crux of the problem.”