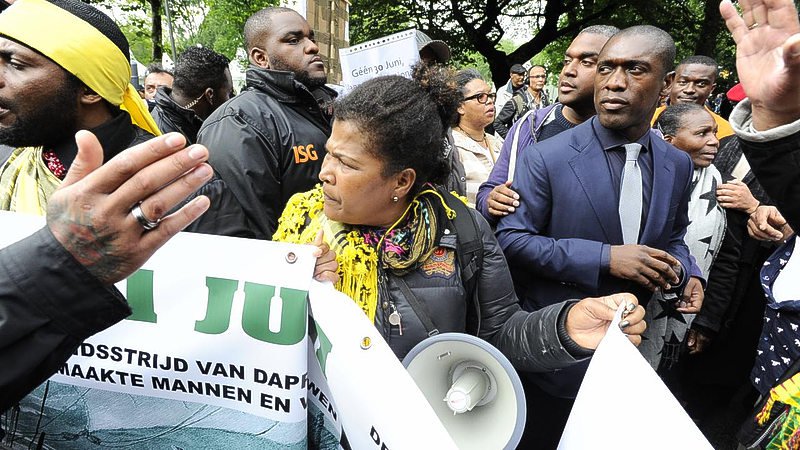 AMSTERDAM–Dozens of protesters disturbed the national commemoration of the abolition of slavery held Thursday at the Oosterpark in Amsterdam.

They disagree with the decision of the organiser of the commemoration, the National Institute of the Netherlands History of Slavery and Heritage NiNsee, to organise the official commemoration and the celebration on two consecutive days, on June 30 and July 1.
In voicing their disagreement the protesters blew whistles and were slamming on pot lids. They offered Mayor of Amsterdam Eberhard van der Laan a petition in which they asked him to reconsider and hold the commemoration on July 1, as was customary in previous years.
The Mayor promised to engage in talks with the protesters before the summer recess. He invited them to join the ceremony or to leave. The commemoration started after a 25 minute delay, but the protesters remained noisy in the background.
Also during the speeches there were many interruptions. The Police had to interfere and ask the people not to disturb the speakers. Former soccer star Clarence Seedorf, among others, asked the protesters to remain calm and continue the discussion at a later date.
Minister of Education, Culture and Science Jet Bussemaker represented the Dutch Government and said that although slavery has been abolished it still occurs in the Netherlands that someone’s identity is being denied or that another identity is being forced.
She mentioned an incident with rapper Typhoon, who was held by Police because his expensive car did not fit his “profile.” Minister Bussemaker also mentioned the emotions around the figure of Black Pete (Zwarte Piet).
Mayor van der Laan said the “criminal history” of the slave trade is still visible and closely attached to the modern day capital of the Netherlands and to “the way in which we are living together. That is not always easy. Tonight was an example of that and there are different opinions about how to do that. We all agree that it must be done: looking back together into the past with an open view and into the future.”
Source: Daily Herald
Emancipation Day ceremony disturbed by loud protesters