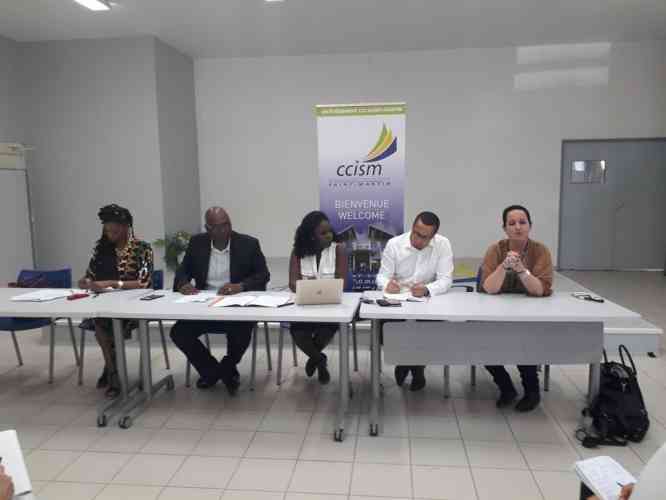 MARIGOT–The recent hosting by the St. Martin Chamber of Commerce (CCISM) of a conference debate organized in collaboration with the Bar Association of Guadeloupe-Saint Martin-Saint-Barthélémy on the topic “Emergency Social Measures Post-Irma”, drew much interest from the business community.

The objective was to remind business owners of exceptional and temporary arrangements made by the French government to help businesses maintain employment after Hurricane Irma.

The subjects selected for discussion were:

1. Companies whose activity could be restarted on the short term: moratorium on social charges announced by Prime Minister Edouard Philippe on November 6, 2017, confirmed in the framework of the social security finance law 2018; Companies wishing to benefit from this measure needed to register with CGSS before April 30. These companies were then supported by said body to negotiate a social debt settlement over several months. This measure is still in progress.

2. Companies whose activity could be restarted on the medium term: exceptional partial activity measure. Partial activity permits companies to stop their employees from working (for lack of activity), to assure them 70 per cent of their previous gross salary (not including training), and to be refunded by the State up to a level of minimum wage (SMIC). For employees on minimum wage, this measure does not entail any salary reduction. The employer must advance the funds and is then reimbursed by the State.
Legally, the quota of compensable hours is limited to 1,000 hours per year. Since Hurricane Irma, however, the State set up the partial activity system, with procedural flexibility, within 1,000 hours for the year 2017, and announced a new quota of 1,000 hours for the year 2018.

On December 16, 2017, Minister of Labour Muriel Pénicaud announced an extension of this system, for 2018 until October 31. Finally, the Ministry increased the quota of compensable hours to 1,600 hours, without limitation period by decree on May 2 (published on May 12, 2018).

This means that companies, which have not used all their quota of hours in the first semester, and/or which will exhaust the rights to paid leave, will be able to manage this quota of hours until December 31. This will allow companies to review their strategy based on this new element.

3. Companies whose activity could be restarted on a very long term: exceptional measures for dismissal for economic reasons. As part of the dismissal procedure for economic reasons, employers must offer (companies not belonging to a group of more than 1,000 employees in Europe) a “contrat de sécurisation professionnelle” (CSP) during the preliminary interview for employees whose economic dismissal is considered.
If the employees accept, employers must pay a contribution to the financing of this measure to Pole Emploi, which is on average equivalent to the amount of notice plus expenses, which represents approximately three months of salary (for an employee working in said company for more than two years).

As announced by Muriel Pénicaud on December 16, 2017, the State finally confirmed, by decree of March 29, 2018, that the employers of St. Martin and St. Barths were exempt from the payment of this contribution; a sizeable saving which could allow some companies to ensure their sustainability until they are able to restart activity, avoiding judicial liquidation. This measure is only valid from September 5, 2017 to September 5, 2018.
Therefore, business owners, who, in the current situation, consider that they will not be able to maintain employment in the short or medium term, and who wish to benefit from this measure, must consider their strategy in this regard, right now. After September 5, the measure will no longer be applicable.

Entrepreneurs who have paid the contribution to the funding of CSP, can request reimbursement from Pole Emploi.

“We are not encouraging companies to consider laying off employees, on the contrary. Reminding of this measure is a means to try to safeguard their competitiveness, so that they remain open, and can consider resuming activity and hiring again, at least in the long run,” the chamber said in a statement.