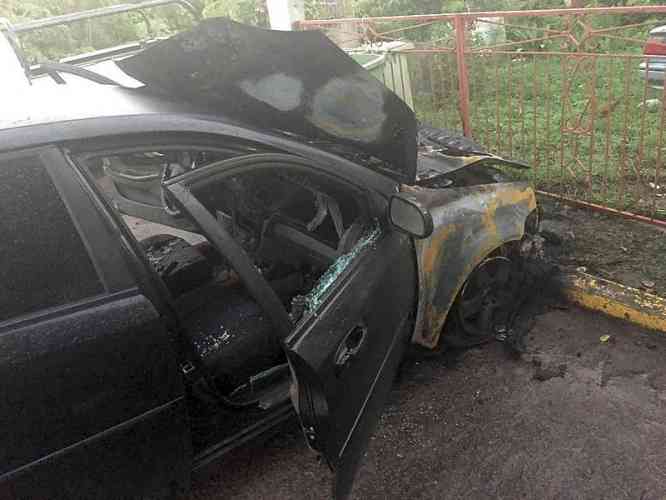 The burned-out vehicle on Lampeweg.

ST. EUSTATIUS–Monday was a busy night for emergency personnel on St. Eustatius. Early Monday evening there was a traffic accident in which two men were injured; later that same night firemen had to attend to car that was on fire.

Two drivers of scooters were racing in the residential area of Golden Rock and for still unknown reasons one drove into the other.

The Caribbean Netherlands Police Force KPCN reported that one of the drivers did not have a driver’s licence and both scooters did not have vehicle licence plates and were not insured.

The KPCN is asking anyone who witnessed the accident to contact the Police Department.

Both drivers had several injuries and were transported to Queen Beatrix Medical Centre.

A large crowd at the Medical Centre and at F.D. Roosevelt Airport came to inquire about the victims’ health.

Later that night both were flown by medivac helicopter to St. Maarten for advanced medical treatment. The investigation into the accident is ongoing.

Around 9:00pm the police received a call that there was a car on fire on Lampeweg in Cherry Tree. The owner of the vehicle stated she had parked her car a few minutes earlier and suddenly heard a loud noise. When she went outside she saw the vehicle in flames.

No injuries or damage to surrounding properties were reported. The investigation in this case also continues.