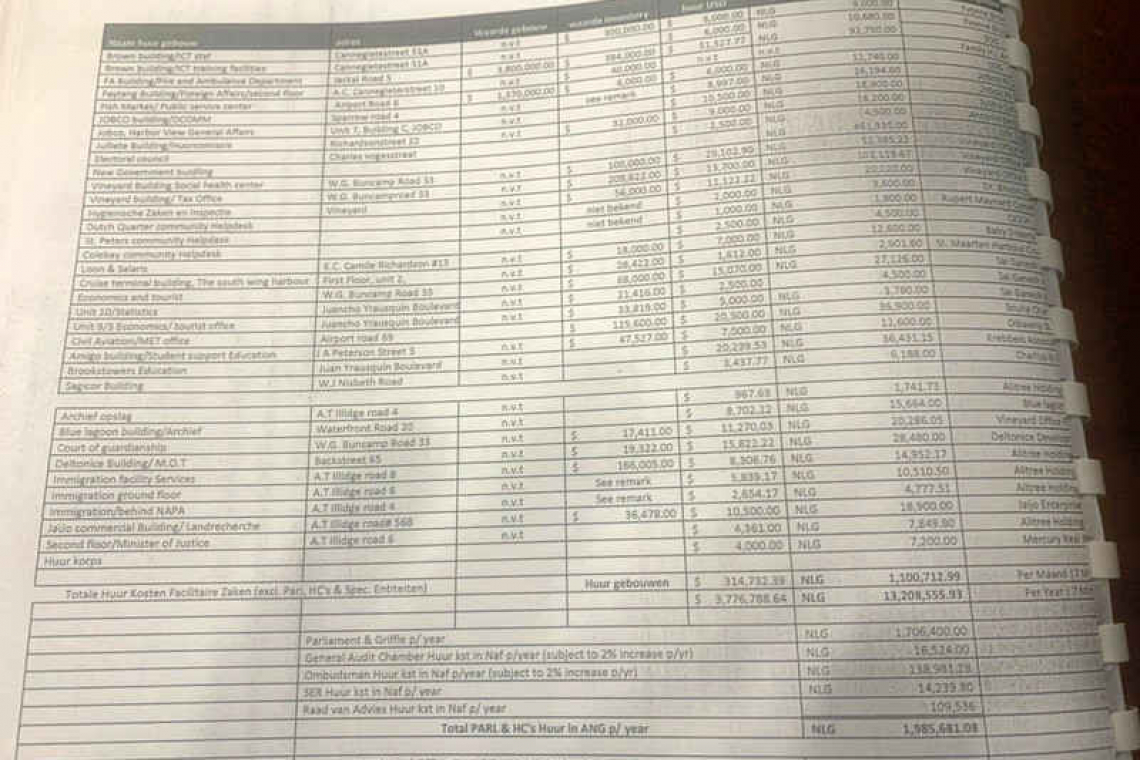 The rental figures as per the 2020 budget.

PHILIPSBURG–Independent Member of Parliament (MP) Christophe Emmanuel said on Sunday that government paying NAf. 15 million a year in property rental is neither tenable nor acceptable in a time when public and private sector workers are being asked to reduce their standard of living by accepting cuts “forced upon them.”

In a time of austerity measures, he said, NAf. 15 million annually in rent is a gross injustice to the people.

Emmanuel’s comments came on the heels of the Audit Chamber’s audit of government rental and housing policy. The audit revealed that government in essence does not have a policy that regulates its renting of property. He had already stated last week that the findings in the audit were alarming, but doubled-down on his comments after receiving the actual financial numbers.

He went on to mention some of his own: “The old post office building needs only repairs/renovation and we can move the tax department in there. There is enough property around the old Civil Registry building to expand that and accommodate the Court of Guardianship and CPS [Collective Prevention Services – Ed.]. Those moves alone get rid of having to rent the Vineyard Building at exorbitant cost,” he said.

He added that government needs to conduct an efficiency study to determine how it can best utilise its own buildings such as the Bureau Telecommunication and Post (BTP) Building which also has space to accommodate.

He said, for example, moving the Civil Registry, CPS, the Tax Department and Court of Guardianship out of the Vineyard Building and the Department of Statistics and Tourism Department from their location on Juancho Yrausquin Boulevard would save government approximately NAf. 3 million annually, which could be put towards renovations and repairs of other government-owned buildings that have been sitting unoccupied.

He said government is obviously not serious about cutting from within. He said that, moving forward, government must take a serious look at its own waste and finally tackle the issue before even considering burdening workers financially.

“People work years to build up a salary and benefits. Government’s responsibility is to ensure that its people can maintain a decent quality of life, not negatively affect that life through unreasonable actions against workers.

“People are not machines. You don’t just change the oil, close the hatch and carry on. You affect their entire lives, their entire future. It is already a disgrace to do this, but this government makes it worse by ignoring the shortcomings in the organisation itself and doing things contrary to being in solidarity with the people – things such as increasing garbage collection cost by an unexplained NAf. 2 million when we are so-called broke,” Emmanuel said.