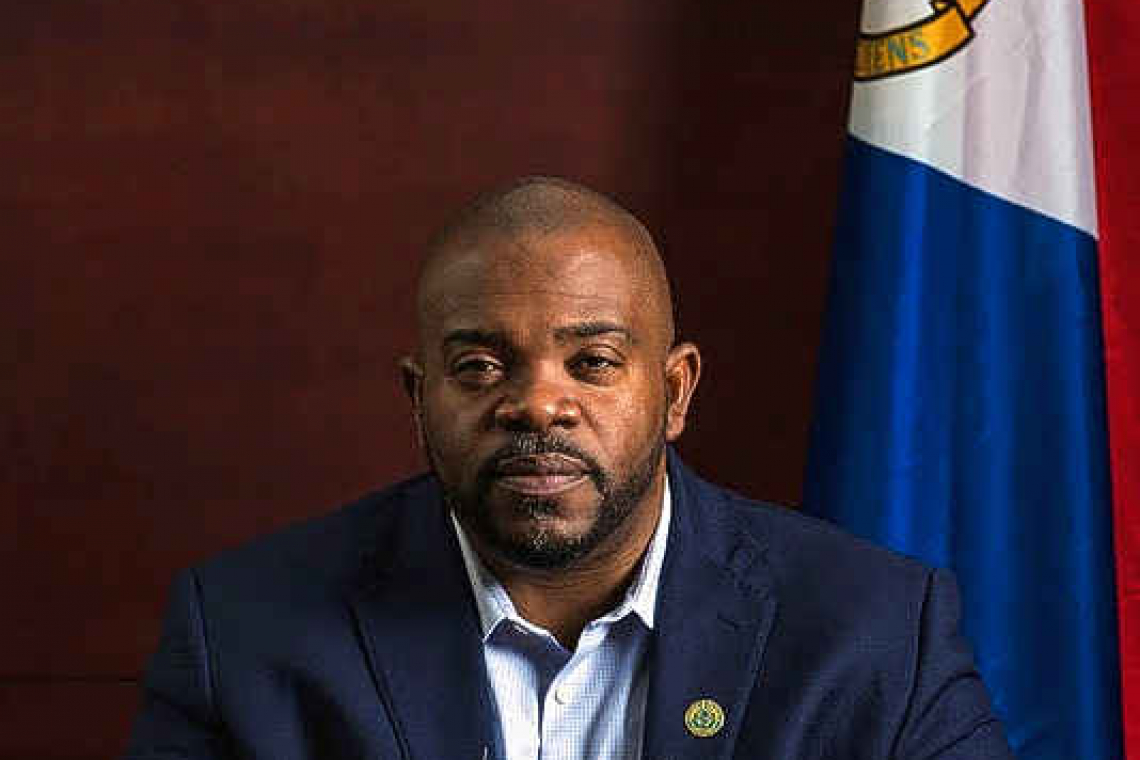 PHILIPSBURG–Independent Member of Parliament (MP) Christophe Emmanuel said two things became clear when State Secretary for Interior Affairs and Kingdom Relations BZK Raymond Knops “once again blackmailed” St. Maarten in return for liquidity: the Dutch government recognises that they are dealing with a weak St. Maarten government and an even weaker prime minister, and the professed integrity of the Dutch government is worthless.

Emmanuel said Prime Minister (PM) Silveria Jacobs and her government put their weakness on full display when they suspended the chairman of the airport holding board Dexter Doncher for doing what they (the government) supported all along, claiming corporate governance failures which, the MP said, ironically implicates the government for failure of oversight. “At some point, it becomes about leadership. Where was that from the prime minister?” Emmanuel asked.

Referring to Knops’ most recent letter to Jacobs in which he said there will be no fifth tranche of liquidity support (NAf. 39 million) until her government “has acted with enough decisiveness to structurally repair the problems at the airport,” he said, “This letter reveals that Knops has no respect whatsoever for the PM and her government, telling the PM that trust and confidence in her and her government is damaged, clearly calling the PM a liar by not keeping promises, and describing her government as indecisive and always late.”

The MP said the prime minister and Knops deserve each other since both are disingenuous in their intentions, and continue to insult the intelligence of the people.

Emmanuel said once Knops realised that Jacobs and her government were stalling and sending mixed signals, it gave him, BZK, Schiphol and the World Bank an opening to exploit a weak, indecisive government. “Only weak people act the way St. Maarten government has been acting. Knops is being the usual bully with weak people. Although the airport has nothing to do with liquidity support, he knew that he could probably get away with blackmailing St. Maarten again, because he knows who he is dealing with. He boldly told the PM in his letter that she cannot keep promises. What does that tell you?” the MP asked.

He further explained that Knops has lied to the First Chamber of the Dutch government, as well as to the government of St. Maarten when he said, “agreement is agreement” and once St. Maarten signs the implementation agenda for reforms outlined in the country packages, the fifth tranche of liquidity will be released. Furthermore, Knops made the Parliament of St. Maarten send him a letter in which it (not Emmanuel) re-confirmed that he has the support for the trajectory of the Caribbean Body for Reform and Development COHO. Knops said the letter was enough and liquidity would be released.

“Now, however, he realised that Schiphol was not getting what it wanted from the airport holding board, so he is now using that as an excuse to withhold liquidity support; [it – Ed.] doesn’t matter that one has nothing to do with the other. Because of St. Maarten’s game playing, he is doing exactly what he has accused St. Maarten of doing: not sticking to agreements. In the process, he has shown to have no integrity whatsoever,” Emmanuel said.

In response, the MP said, the prime minister and her government did what they always do: they look for an excuse for a situation they created or a convenient scapegoat. “This time, the scapegoat is Chairman of the airport holding board Dexter Doncher, who they suspended for three months, to rush off the agreement with Schiphol while their puppet CEO [Chief Executive Officer Brian Mingo] is back in place. But I assure you, if that agreement is finalised with some of the ridiculous demands Schiphol was making and Doncher was protesting against, we will have a problem in this country.

“The government knows full well that it wanted the CEO fired since last November. The government knows full well that Doncher and the holding board were told to proceed. Now you want to make him the scapegoat because Knops and the Dutch found a new way to blackmail you over money. This is the same prime minister who said in Parliament that we are not flat on our backs for sure when it comes to liquidity, only to have the Minister of Finance [Ardwell Irion] tell us that we will be out of money at the end of the month,” Emmanuel said.

He said it is shameful that the prime minister of St. Maarten sat by in silence when the case was being laid out against the exorbitant cost of Schiphol appointees to the airport, overspending by the CEO and mistreatment of the employees, but can now claim corporate governance infractions simply for political survival.

Emmanuel said both Knops and Jacobs have no concern for the people of St. Maarten based on the actions of both, starting with income and benefit cuts, to present actions. He said Knops is fortunate that St. Maarten has a weak government to bring his obsession with the complete takeover of St. Maarten’s most strategic assets to fruition. “And St. Maarten’s PM and government are now experts in selling out its people to appease the Dutch,” he said.