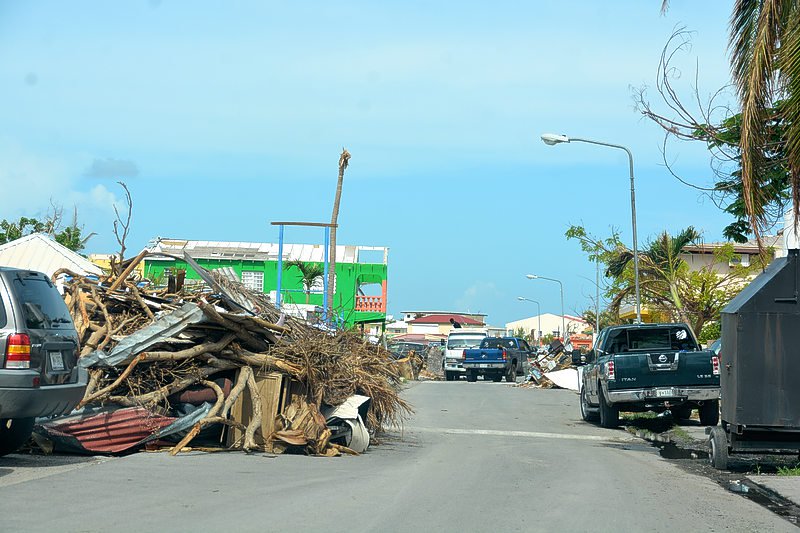 PHILIPSBURG–Minister of Public Housing, Spatial Planning and Infrastructure VROMI Christophe Emmanuel is satisfied with the pace St. Maarten is cleaning up their homes, businesses and streets post-Hurricanes Irma and Maria.

He has noticed the increased efforts of companies and individuals making sure that their buildings are clean.
During Wednesday’s Council of Ministers press briefing, the Minister thanked the hard-working staff of his ministry for the work they continue to put in on a daily basis.
“The road network was hit hard and we have made an assessment of what needs to be done, but budget remains a challenge,” stated Emanuel. “As much as I want to see more done, I think we are moving at a good pace as far as the cleaning is concerned. We would like residents to inform Public Works about their plans for cleaning, so that we don’t have to come pick up lots of debris at the same area all the time.
“Government already went through certain areas but we are seeing that debris is back again. We need to do this together instead of it being placed on the side of the streets. There is one snag right now, as we only have one location where we are piling this debris, but the crusher is working 24/7.”
He also announced that a barge is coming to the island to move 100,000 tons of material. He thanked the organisation in the Netherlands that provided the essential vehicles and materials for VROMI to do its work. “This was really needed and I thank the Dutch organisation for their assistance,” said Emmanuel.