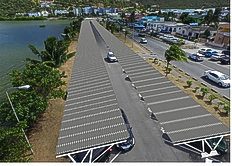 PHILIPSBURG–Utilities company GEBE should not expect Government to transfer any land to the company for its planned solar energy park along the Walter Nisbeth Road also known as Pondfill Road.

According to a Power Point presentation GEBE made to Government in February regarding the solar car park, Government as shareholder of GEBE will have to formalise the signing over of the parking lot land on the Walter Nisbeth Road to the water and light company for its solar energy park project to go ahead.

However, Minister of Public Housing, Environment, Spatial Development and Infrastructure VROMI Christophe Emmanuel does not see the need for land to be transferred. “Why should government transfer land to GEBE if they are requesting to put down a solar park? It’s just a matter of GEBE and government coming to some kind of agreement allowing them to use a parking lot. Government doesn’t have to transfer land to GEBE and I don’t think government will be transferring no land to GEBE. Government does not have to transfer the land,” the Minister said in response to questions on the matter on Wednesday.

Emmanuel said the issue had been a “topic of discussion” in the Council of Ministers meeting on Tuesday.

In addition to the land, GEBE’s presentation said the water and light company would also need to sign a final Engineering, Procurement and Construction (EPC) agreement before construction can begin.

As part of the solar project, GEBE had signed a Letter of Intent with Aruban company Sunshine Real Estate last year. The LOI is for Sunshine Real Estate to assess several identified locations and present financial, technical and operational details for the EPC to GEBE, as a result of a tender process that the company won.

Chairperson of GEBE’s Supervisory Board Roy Marlin had said there would be clear advantages to persons wanting to be stationed for an extended period under a covered parking area.