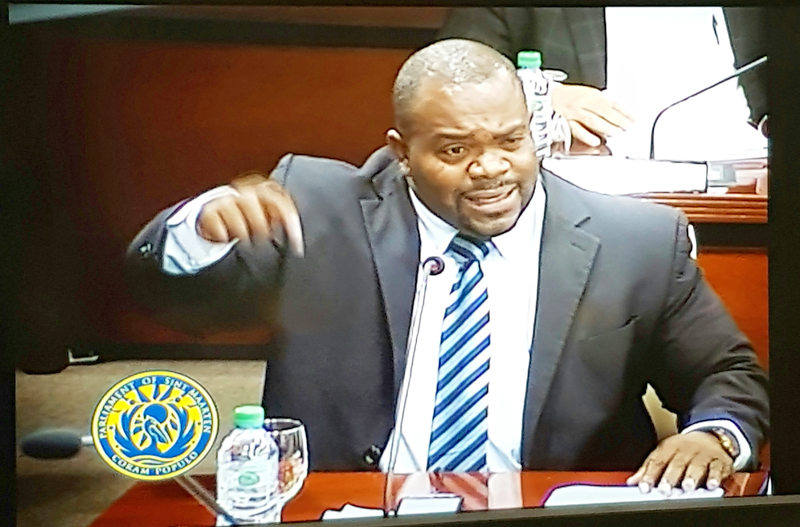 PHILIPSBURG–Tax all car rentals instead of imposing a ten-guilder departure tax, National Alliance (NA) Member of Parliament Christophe Emmanuel told Finance Minister Richard Gibson, Sr. in the debate on the draft 2017 budget in the Central Committee of Parliament on Wednesday.

Emmanuel was vehement in his stance about more taxes not affecting the people of the country. “St. Maarten has twice the number of car rentals than there are in Anguilla. St. Maarten gets more tourists than Anguilla,” he said.

The country has more than 100 car rental companies, said Emmanuel. This can lead to Government collecting “millions, but the minister is talking about a departure tax.”

The idea of taxing the car rentals – imposing a tax on each car rented – has no cost, while “the departure tax will cost the St. Maarten people.”

Following the analogy of the chicken, started by MP Silvio Matser (United St. Maarten Party), who had referred to the tourism industry as the country’s golden chicken, Emmanuel said of the people and the pending tax: “We are killing the chicken. The legs done gone, because everyone wants drumsticks. We killing the whole chicken.”

The proposal for the departure tax is still being worked on by Government. The basic framework called for a levy of NAf. 10 for all passengers leaving the country by air or sea, except for cruise ship passengers.

The neighbouring British dependency has a US $20-tourist-driver’s-licence fee as an income generator. St. Maarten can well do the same and such has been discussed in the past. Emmanuel pointed out that this was shelved because of international conventions on driver’s licence the Dutch Government is a signatory to.

A tax on online purchases is “a no-no” even if the NA-appointed Finance Minister is hell-bent on it as a means of increasing government revenues, said the MP. “Minister, I am telling you don’t come with this online thing. Leave it alone. Online purchases have been blamed for a sharp drop in Turnover Tax (ToT).

More money can come from establishing a grace period for everyone with unregulated residency for the country at a cost, and do the same for those who need to get their taxes in order, suggested Emmanuel. He suggested the scheme be called “Pay to Stay.”

Emmanuel was also very upset about the decision by the Ministry of Labour to grant permission for the termination of the contracts of a number of workers of Sonesta Maho Beach Resort and Casino. “This government I support terminated the workers without compensation even after they won a court case … why not wait for the verdict in the second court case? But this government sided with Maho and terminated the contracts in the Christmas season. We ain’t got no heart,” he said.

“Government has gone and attacked minimum-wage earners to drink wine and eat finger food with millionaires,” he said of the situation.

Emmanuel was not the only member of the NA-led coalition to strongly question the Council of Ministers, in particular Minister Gibson, Sr. who was in Parliament for the third day of debate on the draft budget. Other members of the coalition have also peppered the Minister with questions, including MP Frans Richardson (US Party).

MP Rodolphe Samuel (NA) called on the Finance Minister “to be clear with the people of St. Maarten – are you going to raise taxes?”

United People’s (UP) party MP Theo Heyliger asked Government to explain how St. Maarten Medical Centre will sell government-granted lands to service payments owed to government, and where money will be found to complete the execution of plans of approach related to the ministry of justice.

He also asked if there is any plan to improve the purchase of fuel on the Dutch side as tax revenues can be generated here, instead of drivers tanking up on the French side. The need to tackle the high profit tax rate was also highlighted by Heyliger as a deterrent to businesses making more investments.

MP Tamara Leonard (UP) called for further explanation from Prime Minister William Marlin about the US $80,000 purchase of Christmas decoration for the new Government Administration Building. She also queried if outstanding payments have been made to various sectors of the justice chain, which includes the Prosecutor’s Office, that have been hampered. Though there is a hiring freeze, Leonard called on Gibson Sr. to look into a way to promote and hire more firefighters.

MP Sidharth “Cookie” Biljani (UP) asked Gibson Sr. to explain what kind of licence fees the budget refers to as generating some NAf. 8.7 million in income for government. He also called for more information the direction government intends to take with tax reform. “What will be removed,” he questioned.

Education and the fair distribution of funds for projects and programmes were the concerns for MP Chanel Brownbill (US Party).

Whether there is a separate fund for road tax, the status of the energy policy and is the budget for the Ministry of Tourism and Economic Affairs aligned with the country’s economic policy were questions from MP Ardwell Irion (NA).

The specific policies to increase government revenues and the availability of an economic plan were raised by MP Claret Connor (UP). He also called for an update on the waste-to- energy project and the joint sewage system with the French side. Connor claimed: “The numbers in the budget just don’t add up.”

MP Silvio Matser (US Party) asked why isn’t the profit tax being abolished or decreased if it is not yielding much for government. This would make the country more investor- and business friendly, he said. He also questioned if the policy of the Ministry of Public Housing VROMI to limit building heights and other aspects was not hurting investment.

MP Sarah Wescot-Williams asked whether the NAf. 100-million loss to the economy due to two cruise lines moving away was based on “guess work” or on solid data. She pointed out that much of the budget refers to the needs to follow up via the introduction of the legislation, but there is no money for such, as was stated by the Finance Minister.

The status of the Integrity Chamber was also asked for by Wescot-Williams, as well as the amount of rent government is paying for the buildings it occupies, including the administration building on Pond Island.

MPs will get answers from the Council of Ministers today, Thursday, to these questions and others they posed on Wednesday, when the meeting resumes at 2:00pm in Parliament House.