Home Headlines & Top Stories Emmanuel: Waste to energy can be reality in 18 months 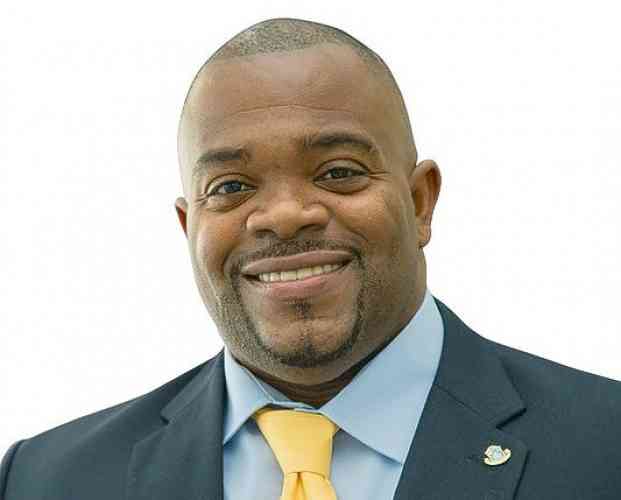 PHILIPSBURG–Minister of Public Housing, Physical Planning, Environment and Infrastructure VROMI Christopher Emmanuel said on Wednesday that a waste-to-energy facility can become a reality in St. Maarten in 18 months providing the concession agreement is approved by the Council of Ministers and all signatures are obtained from the GEBE board for the related power-purchase agreement.
The concession agreement is expected to be handled in a Council of Ministers meeting today, Thursday. He said the power-purchase agreement has been at GEBE for the past three months awaiting four signatures from the Supervisory Board of Directors and thus far only two members – Tadzio Bervoets and Bienvenido Richardson – have signed, and another board member has promised to sign providing additional information has been received.

Other members of the board are Roy Marlin, Agnes Monte, Sandy Offringa, Patrice Gumbs and Oral Gibbes.

Speaking at the Council of Ministers press briefing held on Wednesday afternoon, Emmanuel also promised to release the entire Memorandum of Understanding (MOU) that he had signed with Canadian company Envirogreen in July. However, The Daily Herald had not received the agreement up to press time.

Emmanuel alleged that there were “powers that be” that did not want to see the project get off the ground because they benefit from the current situation. When asked to be specific about the allegations, he said the powers that be are “the elements who always make it possible for these sort of things not to get off the ground.”

He said also that it is for the media to research why other members of the board have not signed the power-purchase agreement, alleging that games are being played.
“If this is passed through the Council of Ministers and through GEBE, 18 months from now, even without the power-purchase agreement, there is US $9 million waiting to be injected in this economy,” Emmanuel said, noting that machinery, bailers, shredders and loaders are on the docks in Canada ready to be transported to St. Maarten to separate, bale, store and pack garbage in St. Maarten that will be burnt once a plan is in operation, to create energy.
“It’s right there waiting. US $9 million dollars – 150 local jobs [to be created – Ed.] in these times. All of that is in the agreement,” he said.

Emmanuel said the project will not cost Government a dime. The $80-85 million project will be completely funded by Envirogreen, he said. The company will separate and burn the garbage produced in St. Maarten and sell the energy produced to GEBE.
“So in terms of Government having to put up any large sums of money, it is not the case,” he said.

Emmanuel said he had met and had “a very good discussion” about the matter with Governor Eugene Holiday on Wednesday.
“I told the Governor that I am placing this [MOU – Ed.] in his hands because I believe that this is the best thing to solve our waste problem in St. Maarten. I also told the Governor that I have not deviated from previous agreements in terms of the path taken to reach this far.

“Whenever any one of those previous agreements reaches this far, Government always ceases to exist. Point in case to where we are right now. I also told the Governor that the powers to be, I believe, don’t want to fix the problem because they benefit from it as it is,” he said.

Emmanuel said the undermining of the project had begun some time back with reports of a top official of Envirogreen misusing the rights to dispose of waste. Emmanuel said this was absolutely not true and the media reports had to do with another company, Envirogreen Processing in the United States, while the company with which he had signed the MOU was Envirogreen Mining in Canada.

“It’s two different companies,” he said. “The undermining started long ago. And for some reason there seems to be a hard-one for the Minister or the Ministry of VROMI because I tend to do things differently and I tend to think out of the box and I want to see things done.”

He said it had taken Envirogreen’s attorneys three months to go through the document and send it back to Government, and it had taken local attorney Eric de Vries six months to make the changes and return the adjusted document to him last week.
“I am prepared to release the entire document to the public, page by page, so everyone can read it and peruse it for themselves. This has not been done before for Synergy or any other company. I am doing this all in the name of transparency, because you have a right to know what you are signing up for.

“Because at this stage I have really had enough of the back-and-forth, and whenever the landfill is on fire only one name called over and over whether in a good or bad way. It [the landfill – Ed.] was created 47 years ago and everyone expects a solution in less than a year, because it’s less than a year that I am in office,” he said.

Under the agreement with Envirogreen the landfill, which Emmanuel said is 43 metres high today, will be half the size in 15 years, he said. “Out of 17 proposals that have presented their plans, this was the only company that agreed to mine the landfill.
“GEBE is operating at 43 cents per kilowatt hour. Gas prices will be going up. They [Envirogreen – Ed.] are coming in at 26 cents per kilowatt hour. A nine-megawatt plant, no more power outages, reduction in GEBE bills. …

“Now you will have a substitute where, when you are operating and maintaining other engines, you can transfer the load to another supplier so you will not have that strain. Load-shedding won’t be happening anymore. When they (GEBE) are off the grid here, they are on the grid over here. [It will create – Ed.] clean renewable energy from garbage that will cost the people of St. Maarten just more garbage,” Emmanuel said.
He said he is happy that Chairperson of Parliament Sarah Wescot-Williams has called Envirogreen officials to Parliament on the matter.