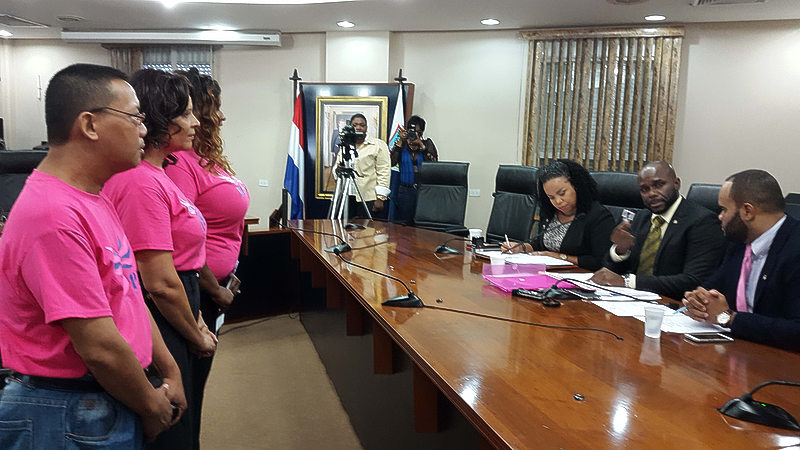 PHILIPSBURG–“My mother always said if you know better, do better,” a very emotional Helping Our People Excel  (HOPE) leader Mercedes van der Waals-Wyatt said as she submitted her party’s candidates list of three to the Main Voting Bureau.   Standing with fellow candidates Lucrecia “Loekie” Morales and Jacinto Mock before the Bureau, Van der Waals-Wyatt asked if she could make a speech. She was granted permission and promptly broke down in tears, saying she was very nervous and emotional.

Regaining her composure, the former radio personality said she was also inspired by the women of the country, past and present. She singled our national hero One Tete Lokey, the brave slave woman who defied her masters by speaking outagainst the treatment and bondage of her people.   “Slave women were called insolent and evil by owners for speaking out,” she said, adding Lokey was one such “courageous woman” who fought for country and people. “She was a spitfire.”   HOPE is “supportive of creative ideas and promoting self-worth.”   “HOPE is a very small party, but we know with every small deed hope can accomplish everything,” the party leader said. And with the conviction, the party hopes to play a part in “reshaping” the country “with a stable and reliable government.”   HOPE needs its list endorsed by 146 signatures from eligible voters to be on the September 26 Parliamentary Elections ballot. The endorsement of the list will take place tomorrow, Tuesday.