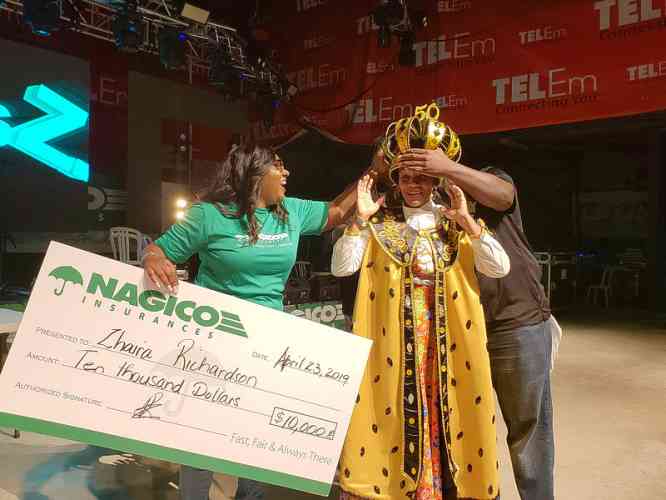 An estimated 1,800 people filed into Carnival Village to hear social commentary through calypso, and watch as Zhaira “Empress Zee” Richardson won the calypso crown and became only the second woman to win the crown in the history of St. Maarten Calypso.

Richardson in her second song “Letter to SCDF” was critical of the foundation and calypsonians who boycotted the 50th anniversary Carnival season.

While the size of the crowd might have caught some people off-guard due to the boycott of the calypso show by many calypsonians, SCDF said it had had no doubt. “It is the 50th anniversary of Carnival. Everyone was looking forward to this for at least two years. Nobody was going to let the date of a show keep them from enjoying what they love. The crowd was bigger than when the show is placed before J’ouvert,” SCDF President Alston Lourens said.

“We are looking forward to working with Ruminni and his Protégé Project which aims to revive the Junior Calypso Competition by going into the elementary schools and getting them involved. We are really excited about that. But right now, we have a new Queen and we are very, very proud of Empress Zee. She will represent SCDF and calypso well,” Lourens said.

Empress Zee won the title on the heels of her tune entitled “Calypso Here to Stay” in which she criticised both SCDF and the calypsonians who chose to boycott the competition. Rogers had a similar song called “A Calypsonian” in which he told the boycotting calypsonians that their move does not translate to a stand for calypso.

Rogers said after the show, “A king isn’t measured by accolades, but by the stands he takes. It’s always easier to follow, but true leadership is standing for what you believe in even if it means standing alone.

“I meant every word I sang last night! It’s a fraternity driven by hate and vengeance. They are rejoicing and you will hear them speak, but my heart is warm and I am proud of Zhaira Richardson. The number of crowns one wins doesn’t define the best calypsonian. Calypso is about inspiring and making those around you better.

“Two years ago, 2017, I made you guys a promise that calypso will never die. Even when you felt like it was I told you not to lose faith, for as long as I breathe I’ll do this until I am dead and gone.

“Empress Zee, and to all those that participated, thank you for being brave.”