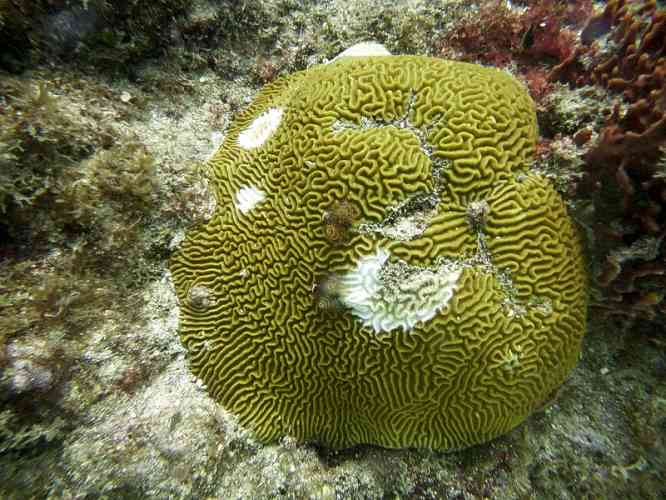 COLE BAY–Nature Foundation St. Maarten has recently established the presence of tissue loss disease on several local coral reefs. The disease is relatively new and has been plaguing coral reefs in the Atlantic Basin for the last few months.

The coral reef disease manifests itself through the creation of white blotches on stony coral, eventually leading to the loss of tissue and death in the coral colony. The disease affects 20 different species of coral and is able to kill colonies within several weeks or months.

“In June, we sent out a warning to our local dive operators about the coral disease which started in Florida and impacted Jamaican reefs by that time. Unfortunately, about two months ago we started to notice the disease starting to affect our local coral. We can now confirm that St. Maarten corals are affected by the tissue loss disease,” stated Nature Foundation’s Project Officer Melanie Meijer zu Scholchtern.

“With the assistance of coral and reef restoration expert and leading scientist on the Plant a million Coral initiative David Vaughan, we were able to confirm the disease on our local reefs. The disease has been detected on dive sites in the Man of War Shoal Marine Protected Area, as well as on other reefs around the island,” she said.

Sick corals first appeared in Florida off the Miami-Dade County area in September 2014. The outbreak area has since progressed 175 kilometres to the northern limit of the Florida reef tract and southwest to Looe Key in the Lower Keys.

Numerous coral species, except acroporid coral, have been affected. Disease prevalence has reached 80 per cent of all colonies present at a site, and a number of coral diseases have been observed.

Meanwhile, sick and dying corals are found on Jamaican reefs with similar signs of disease and overlap with the reports from Florida. Also, in Mexico a severe outbreak of coral disease affecting similar species and exhibiting similar patters as those in Florida has been recorded. St. Maarten can “unfortunately” now be added to the list of affected areas for tissue loss disease,” Nature Foundation said.

“The disease appears to be waterborne and may potentially be spread by divers’ gear, according to the Florida Disease Advisory Committee. They advise divers in the Caribbean and Florida to soak their gear in a five-per-cent chlorine-bleach solution for 30 minutes, and rinse well after. We also advise all divers to be aware of their fins and to not touch any diseased or healthy coral, as they may transmit the disease to other corals. Let’s not have scuba divers become paths of a coral disease,” Meijer zu Schlochtern said.

Local reefs have been hit hard due to Hurricane Irma and human activities, such as pollution, nutrient runoff, overfishing and climate change.

“Unfortunately, this is another challenge that we have to deal with in managing what is one of our most important natural resources,” said Nature Foundation Director Tadzio Bervoets.

“Coral reefs provide more than 50 million dollars in goods and services to our economy annually, yet we have been facing significant challenges with regard to our coral, ranging from coral bleaching to 80 per cent of our coral being lost due to Hurricanes Irma and Maria and now this disease. We are working hard in trying to manage this disease and trying to create extra reef habitat as part of the One Million Coral Initiative, but we need the support of decision makers and the wider community in ensuring that we can continue our work to ensure that we have a healthy coral ecosystem. A ban on plastics and non-coral friendly sunscreen would go a long way,” he said.

Recently, the Foundation located large amounts of single-use plastics on local reefs. Research has found a link between plastic and coral-reef diseases. The likelihood of disease increases from four to 89 per cent when corals are in contact with plastic and it suggests that ocean waters with lots of plastic waste might carry other pollutants that could also be contributing to higher rates of coral disease.