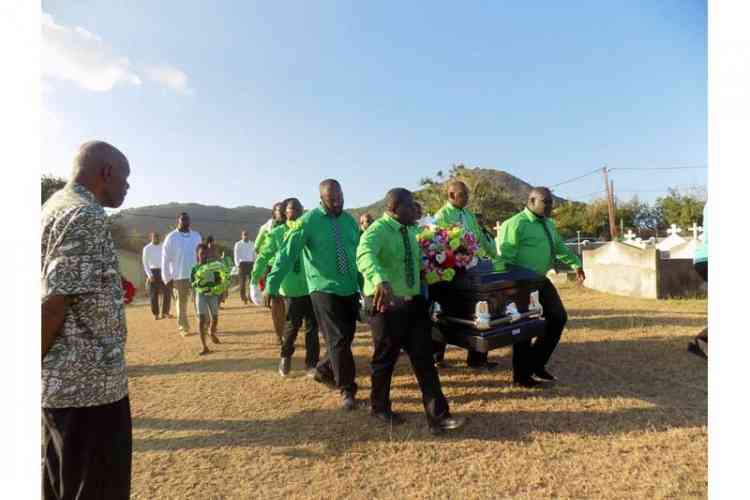 Family members of the late Estelle Berkel carrying the deceased into the Salem Cemetery.

ST. EUSTATIUS–The interior of the Bethel Methodist Church was transformed into a sea of green on Tuesday, as Statians bade farewell to the late Aruba-born Estelle Mercedes Berkel.

Family and friends filled the church to celebrate what Reverend Vincia Celestine described as the life of “a truly remarkable lady.”

Berkel was born on September 13, 1949 and died on March 2. She is survived by her four children Jarmilla, Odalis, Dale and Glen and by many grandchildren and great-grandchildren.

Berkel contributed significantly to the Statia community during her life serving as a professional cook at the Queen Beatrix Medical Centre as well as a volunteer.

Her funeral service began with a song for her four children delivered by the Seventh Day Adventist Redeem Quartet.

Saba Commissioner Rolando Wilson then painted a kind picture of the “no-nonsense” Berkel. “Estelle was a very outspoken lady whose words earned respect,” he said. “She loved to see progress and her encouragement of young people in the softball team was fantastic – often wearing their colours at the various matches.”

Family members during the funeral.

A choral tribute was delivered by members of the 49ers and the Lion’s Club. Funeral attendees were also told of Berkel’s “wonderful personality as a remarkable hostess at seasonal events particularly during Christmas.”

“Estelle always showed respect for those around her,” friend and Island Council member Rueben Merkman said. Alida Francis spoke about her generous presence and character; she then recited Psalms 90.

Reverend Celestine said “Estelle had a great relationship with her children and spread much joy and nothing was too much for her. Although born in Aruba, she became part of Statia soil.” Following the service, a burial service was held at the Salem Cemetery.

A tearful close cousin said after the service “Estelle was a wonderful person, sister, mother, cousin and aunt. She gave Statia a flood of love and learning. Her gifts were immense.”