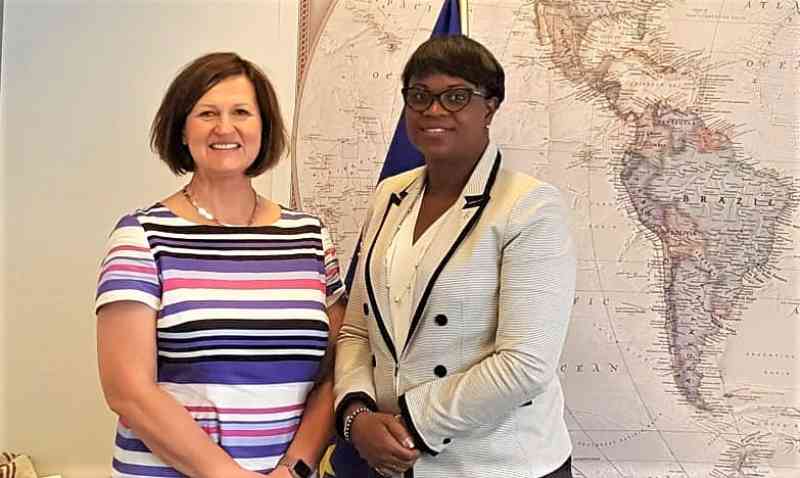 BRUSSELS, BELGIUM–The European Commission has approved the allocation of seven million euros for the building of two multipurpose shelters in St. Maarten.

The European Commission “looks forward” to implementing the project after the 2019 hurricane season has ended.

European Commission Director of Development Cooperation for Latin America and the Caribbean Jolita Butkeviciene passed on this information to Prime Minister (PM) Leona Romeo-Marlin during a meeting on Tuesday.

During the meeting, Romeo-Marlin reiterated her “commitment” for the construction of a wastewater treatment plant in cooperation with French Saint Martin.

“A number of matters that still needed to be addressed were discussed and the Prime Minister [assured – Ed.] that any outstanding concerns would be followed up [on] immediately in order to speed up the process,” it was stated in a press release on Tuesday.

Butkeviciene shared her concerns for Anguilla given the upcoming Brexit outcome. Romeo-Marlin indicated that given the economic, historical and cultural ties between the islands, St. Maarten would do what it can to support Anguilla post-Brexit. She said St. Maarten has been an advocate within the Overseas Countries and Territories Association (OCTA) to guarantee continued cooperation with the British OCTs after Brexit.

The PM also met with VVD Member of the European Parliament (MEP) Malik Azmani and D66 MEP Samira Rafaela, both of whom are newly-elected following the European Parliamentary elections held last May. Romeo-Marlin informed them of the status of the reconstruction in St. Maarten, as both MEPs were interested in hearing more about the progress made thus far and the cooperation with the World Bank.

Rafaela said she has a keen interest in the OCTs’ concerns, as she has roots in Curaçao. She promised to champion any OCT or Kingdom-related issues on behalf of St. Maarten and the rest of the Dutch Caribbean. She also spoke of her intended visit to St. Maarten, Saba and St. Eustatius in the near future, to get a better perspective on the islands, the people and their specific concerns. Romeo-Marlin encouraged this and offered to assist her with the preparations for her visit.

Romeo-Marlin and Rafaela also discussed their shared interests, such as safety, social equality and climate-change mitigation. The PM spoke about the importance of the latter from the perspective of the wider Caribbean and urged Rafaela to advocate for continued support to the region, as even though the Caribbean’s percentage of emissions remains rather low globally.

The negative impact on the Caribbean is high, as the region continues to face the annual threat of being struck by severe natural disasters such as Hurricane Dorian.

The meeting was held during the PM’s working visit to Brussels.