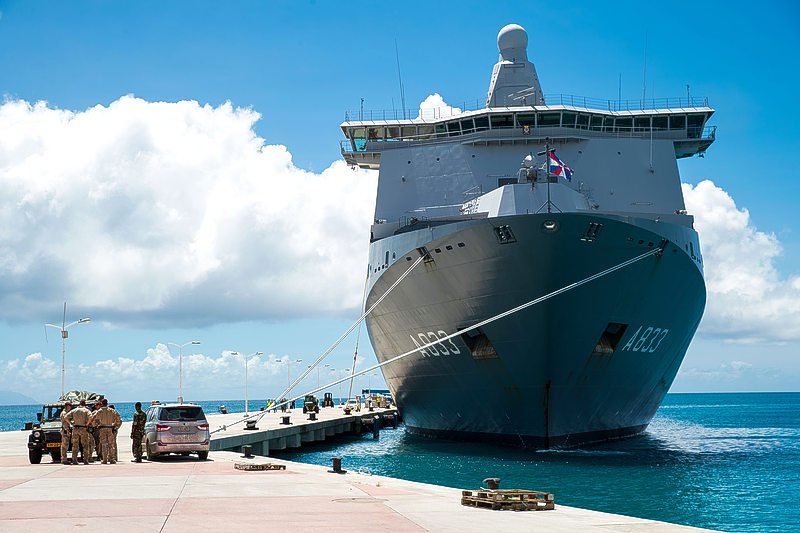 THE HAGUE–The European Commission will contribute more than 2 million euros in subsidies to the deployment of the Joint Support Ship His Majesty Karel Doorman of the Royal Dutch Navy for emergency assistance to St. Maarten after Hurricane Irma.

A lot of the cargo was for destined for repair and cleaning work, while there were also goods that were collected by the various initiatives in the Netherlands. The Ministry of Home Affairs and Kingdom Relations BZK organised the load, in consultation with other Dutch ministries and the Netherlands Red Cross. The latter organisation also sent soup kitchens to cook large batches of food for the people on St. Maarten.

The total costs of transportation with the 205 metre long Karel Doorman, which is the largest ship of the Dutch Navy, were 3.9 million euro, of which the European Commission will pay 55 per cent, which amounts to 2.145.000 euros.

The Karel Doorman left St. Maarten on October 4 after most rapid and efficient off-loading in ten hours time, but the ship remained in the Caribbean for other tasks, including the providing of emergency relief to the Hurricane Maria devastated Dominica.

The ship is expected back on St. Maarten on or around October 28 when it will bring more relief goods, including much-needed construction material. There will also be goods on board for St. Eustatius and Saba.