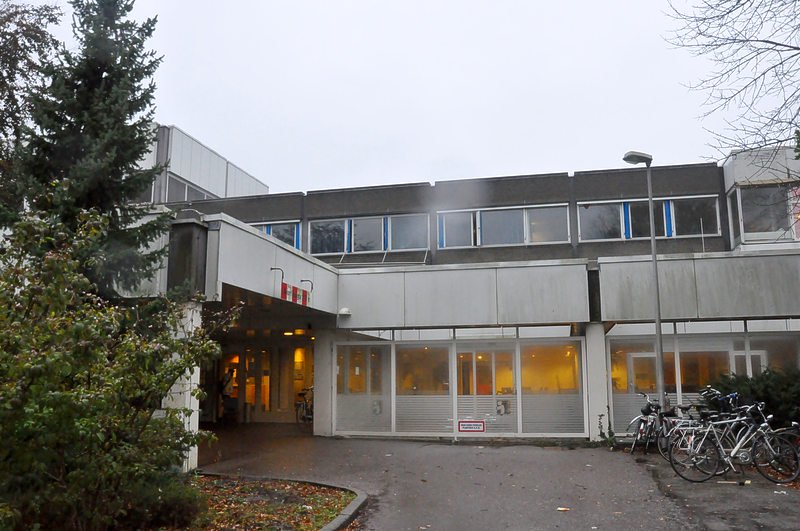 HAARLEM–Thirteen St. Maarteners who have been staying at a temporary shelter in Haarlem after their evacuation to the Netherlands following Hurricane Irma are stuck between a rock and a hard place. Haarlem will not register them as residents. Authorities would rather see them return to their island, but there is nothing to go back home to, the displaced group says.

The group eight adults and five children all lost their homes. They were among the evacuees who left the island shortly after the hurricane. From Curaçao, they travelled on to the Netherlands, where they presented themselves on arrival as homeless, evacuated St. Maarteners in search of a better future.
After a short stay at a hotel, the St. Maarteners were taken to an emergency facility in Haarlem, a former nursing home and clinic where they share the large dilapidated building with a small number of asylum seekers who were granted residency in the Netherlands and are awaiting housing. The emergency facility is only for temporary use and soon has to be vacated to accommodate a construction project.
So far, the group has not succeeded in registering at the Municipality Haarlem. Initially, the lack of documents was cited as the issue: the St. Maarteners didn’t bring documents proving they had been written out of the St. Maarten Census register.
However, according to lawyer Leandro Thomas, retained by the displaced St. Maarteners to help them get out of this desperate situation, the lacking documents were not the main issue, but the consequences of entering this group in the Municipal Register.
Once registered, the St. Maarteners would attain the right to social security, housing and sickness insurance, which the municipality would have to take care of. “That appears to be the real fear of the municipalities,” Thomas told The Daily Herald on Friday.
He said the Municipality Haarlem has shown “very little understanding” of the situation. He said he had been made to understand in the different conversations with authorities that they feared accommodating this group would have a “pull” effect on other St. Maarten residents to pack up and come to the Netherlands.
A spokesperson of the Municipality Haarlem explained when contacted by this newspaper that the Ministry of Home Affairs and Kingdom Relations BZK, the Association of Dutch Municipalities VNG and a number of municipalities have agreed to work on establishing a national policy for dealing with people from St. Maarten who want register in the Netherlands and want to make use of housing, social security and other social facilities.
In anticipation of this national guideline, it was agreed that the involved municipalities will engage in talks with the displaced St. Maarteners to attain more clarity on their intentions and future prospects. The municipalities will actively support a return of these St. Maarteners to their island.
“This doesn’t take away that in certain individual cases, the municipality can conclude that repatriation is not an option in the short term and that registration is appropriate. Haarlem will shortly commence this process,” said the spokesperson, who confirmed that for now, the St. Maarteners would not be entered in Haarlem’s civil register.
The spokesperson further explained that emergency housing was offered to persons who came to the Netherlands without a network and/or place to stay. These persons also receive a small contribution to cover their daily expenses. For now, it has been agreed that people receive support to return home.
The VNG issued a statement on Friday in which it denied media reports that there was an agreement on national level to enter St. Maarteners in the municipal civil registers. According to the VNG, the impression that was created was incorrect. The VNG confirmed that a national guideline would be drafted.
Up to now, a total of some 40 St. Maarteners have reported in the Netherlands after the hurricane. With only their passports and a few personal possessions, these St. Maarteners have appealed to Dutch authorities for help. Some municipalities allowed the St. Maarteners to be registered.
Registration is important for them to pick up their lives. Special provisions have been made for the five children in Haarlem so they can attend school. Some members of the group staying at the temporary shelter in Haarlem have told their stories to the media in the past weeks. Wanting some peace and quiet, they have now decided to remain out of the spotlight.
Attorney-at-law Thomas said that legal position differed per person. Some have resided in the Netherlands before, some have never lived in the Netherlands but do have a Dutch passport, while there are also some who resided in French St. Martin. He said that based on humanitarian grounds there was sufficient reason for the municipality to enter the group in the civil registry, aside from the fact that they have the Dutch nationality.
Thomas will be discussing the different possibilities and scenarios with his clients. One of the possibilities is to register at another municipality which has been more inclined to accommodate the displaced St. Maarteners.
“These people have been living in insecurity for too long. They need to know where they stand,” said Thomas.
Authorities, both on municipal and national level, are of the opinion that St. Maarteners are better off on their own island, not in a faraway country like the Netherlands with a different culture and language. If people decide to come here, they are responsible for arranging their own place to live and work, is the general thought.
However, constitutional law experts said that residents of St. Maarten have every right to request assistance in the Netherlands, for they have Dutch passports and are entitled to ask for help in another part of the Kingdom. And, for that matter, they should be provided with the same assistance that people in the Netherlands receive. (By Suzanne Koelega)