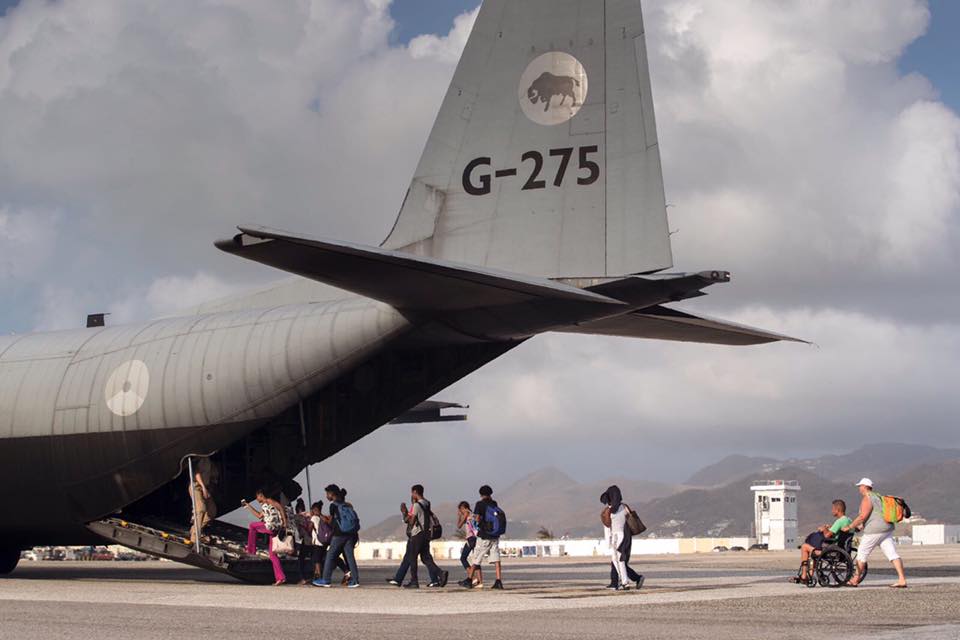 THE HAGUE–The evacuation of people in need from St. Maarten continues in full force today, Monday, while the military and other emergency relief personnel carry on the work of distribution of food and water for inhabitants. A lot of emergency supplies arrive today.

Not only the evacuation and distribution of basic necessities, but also public safety remains a top priority for the Dutch military and the supporting teams. The safety situation has “visibly improved, but incidental lootings have not ceased as yet,” the Dutch Ministry of Defence stated on Monday.
The arrival of additional military contingents has made it possible to accomplish a more extensive patrol scheme and to have a more spread presence in the neighbourhoods and on main roads.
The managing of the safety situation, getting key infrastructure functional such as the airport, harbour, fuel supplies and drinking water facilities are top priorities. At the same time, the distribution of water and food, as well as the evacuations get a lot of attention.
Evacuations of victims, (pregnant) women, children, elderly and physically impaired persons, tourists, and severely affected families of emergency workers and military personnel started over the weekend.
The people were evacuated with military aircraft, the C-130 Hercules of the Dutch military and the two Dash-8 aircraft of the Dutch Caribbean Coast Guard, mostly to Curaçao. On Sunday night, the first some 100 evacuees left for the Netherlands from Curaçao on board of a KDC-10 transport aircraft of the Royal Dutch Air Force. The evacuees, mostly tourists, arrived safe and sound at the Eindhoven military airport on Monday.
The His Majesty Zeeland patrol frigate carried out a survey of the harbour over the weekend. The possibilities to moor large passenger and cargo ships were carefully checked. This inspection resulted in the mooring of the Adventure of the Seas of Royal Caribbean Cruise Lines to discharge relief supplies and to take evacuees on board.
The His Majesty Pelikaan strategic transport ship will arrive back in St. Maarten sometime today after resupplying food, water and emergency supplies in Curaçao. The ship will also bring more defence personnel. After its arrival, the Pelikaan will function as a commando post and forward operating base.
Today, Monday, a very large cargo of water and food is expected to arrive on the island. Marines will assist with the distribution. The 32nd Raiding Squadron of the Marines will continue carrying out patrols, management of the shelters, receiving of the aircraft, aside from the distribution of emergency relief supplies.
Members of the Air Mobile Brigade are guarding the Princess Juliana International Airport together with the Marines. They are in charge of guiding the evacuation process. “We are making sure that the high-priority evacuees leave first,” said the platoon commander.
“Several hundred persons left on Saturday, and even more on Sunday. Those who get to leave are very happy. But those who have to wait get very frustrated. First we allowed the ill persons to leave, followed by families with children,” he said.
The Urban Search and Rescue (USAR) Team of the Netherlands will be arriving in St. Maarten shortly. Part of that 59-member team is trauma surgeon Steven Rhemrev of the Haaglanden Medical Centre who will be assisting at the St. Maarten Medical Centre for some ten days.
The situation in Saba and St. Eustatius has improved, the Ministry of Defence reported. The Marines assisted the local population to clear the roads and helped to ready the hospital, Fire Department and schools for usage.
The Marines left back for St. Maarten on Sunday, where their help is most needed. A few Marines stayed behind on the two smaller sister islands to assist with the fragile communication system.