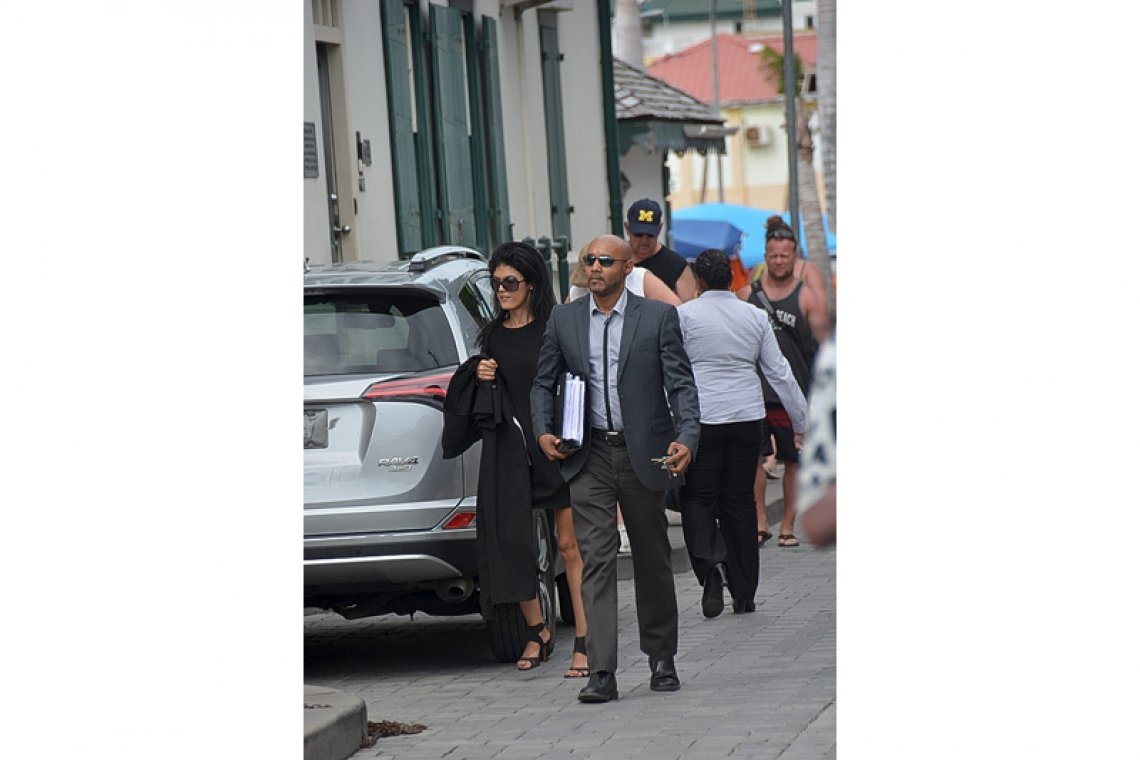 Former Member of Parliament Chanel Brownbill (right) with his attorney Safira Ibrahim on their way to the Courthouse. (File photo)

PHILIPSBURG–Former Member of Parliament (MP) Chanel Brownbill, who on April 17, 2018, was sentenced by the Court of First Instance in the “Emerald” case to eighteen months, fifteen of which were suspended, on three years’ probation, with 240 hours of community service, maintained his innocence during Friday’s appeal hearing.

The lesser court found it proven that Brownbill had deliberately failed to declare income and turnover tax (TOT) for US $1,261,078 in invoices paid by the St. Maarten Harbour Group of Companies to Country Construction company’s bank account. These payments to the company, of which the former MP is the sole proprietor, were made from 2009 up to and including 2016. The company was established in 2007.

The court also found it proven that Brownbill had failed to declare taxes as the owner of Time Out sports bar.

Brownbill and his lawyer Safira Ibrahim had immediately filed for appeal after the verdict was handed down. He told the three-judge panel on Friday that he had filed an appeal because the verdict was primarily based on his remaining silent and on the fact that the Court had considered the former MP a “role model” and that his “tax morale” had played a lesser role.

In the Court of First Instance the prosecutor had called for a prison sentence of 18 months and payment of a conditional fine of NAf. 250,000, on two years’ probation.

On Friday, the solicitor-general followed the demand, but also called on the Court of Appeals to ban Brownbill from the right to be elected for a period of five years. The Court will give its decision March 5.

Brownbill stated in his defence that he has “always” been registered with the Tax Department and that he had a “CRIB-number”, but that he had never received any assessment or settlement. He said he had only realised there was a backlog when he was questioned as a witness in the Emerald investigation.

“I indeed had a backlog in payment of taxes but I did not walk away from my responsibilities,” he said, stating that he had ordered an accountant to bring his finances in order, “but this had nothing to do with my work as a politician,” Brownbill said.

He declared his first tax papers on December 15, 2017, six days after the harbour offices and the home and business Checkmate Security of his friend, distant cousin and main suspect in the Emerald investigation O’Neal Arrindell were searched. Brownbill said his failure to declare taxes was “a bad habit.”

In meting out an unconditional prison term, the lesser court said last year that it was “incomprehensible and unacceptable” that he had not held himself accountable for tax fraud. “On the one hand, he enjoys a generous income as a Member of Parliament. On the other hand, at the public hearing he refused to explain to the community how he arrived at the considerable tax fraud which has disadvantaged the same community,” the Court stated in the verdict.

Similar to his position in the Court of First Instance, the former parliamentarian repeatedly appealed to his right to remain silent on Friday as well.

The Prosecutor specifically stated in the Court of First Instance that Brownbill would not be prosecuted for forgery of company invoices, but also this statement could not persuade him to be more open.

Also on Friday, he failed to provide answers to a number of questions posed by the judges and the solicitor-general. For instance, Brownbill failed to answer the question whether or not he had invoiced the harbour to the amount of $1,2 million and whether his company had actually been working for the harbour. Asked whether he had withdrawn $1.1 million in cash, he said he had “no recollection.”

He also declined to comment about why he had started declaring taxes, but admitted that has problems with his memory. “Sometimes I can’t even remember my own vehicle licence plate,” he said, adding that he also has anxiety problems.

“Why doesn’t he explain himself?” the solicitor-general wondered. According to the prosecution, Brownbill started to declare his taxes because the harbour offices were searched and he felt that the investigators were coming too close.

“I was called as a witness at the [Anti-Corruption Task Force – Ed.] TBO and had an open discussion about my taxes and I got the advice to declare my taxes. I was a witness at the time and not a suspect. I wanted to comply with the law,” he told the court.

The solicitor-general dismissed appeals to the so-called repentance regulation (“inkeerregeling”) for taxpayers who had not filed for taxes, but were willing to settle the matter out of court.

Brownbill did not start settling the matter with the Tax Office until after the searches in the Emerald investigation, the Prosecution said.

In her 75-minute pleadings, attorney Ibrahim pleaded with the court to declare the Prosecutor’s Office’s (OM’s) case against her client inadmissible, because the case should not have been brought before a criminal court, but handled by the Tax Department instead.

“The OM is wrongly sitting in the seat of the tax judge,” the lawyer stated. “There are no grounds for prosecution. This case is a flagrant violation of tax laws and regulations. Eighty per cent of taxpayers fail to declare their taxes in a timely manner. This is being tolerated and only punished with a fine.”

The lawyer stated that her client’s appeal to the repentance regulation was valid, as he had “voluntarily” reported himself with the Tax Office and that Brownbill had nothing to do with fraud committed at the harbour.

Ibrahim also claimed that the alleged tax crimes committed between 2009 and 2011 would fall under the statute of limitation and would no longer be relevant to this case. She also referred to the grace-period introduced after Hurricane Irma, and said that only over the years 2012-2014 no taxes were paid.

She said the solicitor-general had “missed the mark” in formulating his demand. “My client does not have to testify in his own case and incriminate himself,” the lawyer said. She accused the Prosecutor’s Office of “bribery” in promising the defendant that he would not be prosecuted for forgery.

“The social function of my client does not alter the position of the defence that he held himself available to the investigating team and has shown an open attitude and has not run away from his responsibility,” attorney Ibrahim said in pleading for Brownbill’s acquittal for lack of legal and convincing evidence.