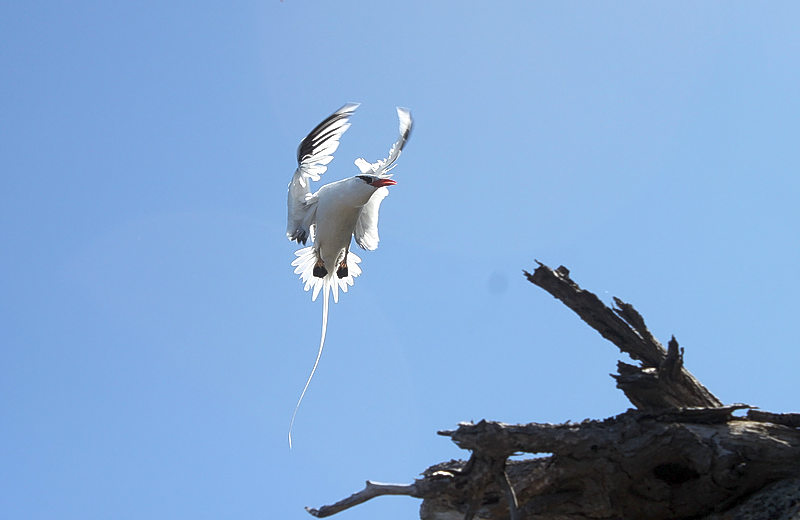 AMSTERDAM/SABA–Continuation of the monitoring of the nests of the red-billed tropicbird in Saba and the removal of feral cats is of vital importance to prevent future extinction. Despite these recommendations by scientists, not enough is currently being done to protect the local breeding sites of this extraordinary seabird.

The message of Dutch biologist Michiel Boeken is clear in his scientific article on the breeding success of the red-billed tropicbird (Phaethon aethereus mesonauta) in Saba, which has been published in Ardea, the official journal of the Netherlands Ornithologists’ Union: as a major breeding place for this bird, Saba needs to continue past efforts to protect this species.

During his stay on the island as the Director of the Saba Comprehensive School SCS, Boeken in his free time monitored the breeding success of the red-billed tropicbirds in 2011 and 2012. He did so on the initiative of the Dutch Caribbean Nature Alliance (DCNA) and the Saba Conservation Foundation (SCF).

Boeken discovered that the red-billed tropicbird, the largest of the three tropicbird species, was not faring well on Saba as their breeding success had plummeted to zero at two nesting colonies in the south and south-west side of the island, Tent and Great Level.

Breeding at the 100 to 300 nests was zero due to the predation of the newly hatched chicks by feral house cats. Boeken was able to prove that by using camera traps which showed that feral cats ate the young chicks. The black rats also pose a problem, although less so than the many cats.

In the single large colony of Old Booby Hill on the eastern side, estimated to contain approximately 1,000 nests, rates of predation were lower, resulting in a breeding success. Here the survival from laying until fledging was some 65 per cent, observed Boeken. Based on scientific methods, the daily survival of eggs and chicks and nesting success was calculated at 48 per cent per pair.

Boeken estimated the size of the Saba breeding population to be at least 1,300 to 1,500 pairs, which is larger than the 2,000 estimate of 750 to 1,000 pairs, representing some 35 per cent of the total Caribbean red-billed tropicbird population. This makes Saba a major breeding area for this seabird, possibly the largest in the Caribbean, and altogether even more vital to protect them.

“In light of the worldwide deterioration of this species this makes the importance of the Saba breeding population even greater. Considering that tropicbirds can become several dozen years old and the fact that they are very loyal to their nest location, a prolonged bad breeding success can go undetected without monitoring, ultimately with a possible unexpected collapse of the population in the future,” stated Boeken.

Tropicbirds are very loyal to their nest: they breed year after year in the same location, with their partner. The youngling that flies out will remain on the open sea for three to four years before returning to its birth colony with a partner to find a nest.

Because the birds return every year for the nesting season it may initially go unnoticed that no younglings are flying out as they have been killed. But after several dozen years, it will suddenly become apparent that no birds return because there was no new generation to take over from the birds that have died.

Tropicbirds breed year-round, but are most active from December until March. Saba is an ideal location because of its steep rocks and low shrubby vegetation. The island is listed as an Important Bird Area by Birdlife International.

Scientists of the IMARES Institute for marine research of the Wageningen University arrived at the conclusion following on-the-scene research from September 2013 to May 2014 that effective removal of feral cats drastically improved the breeding success of the red-billed tropicbird.

“Following two seasons of trapping and removal, our results show that the overall breeding success increased from zero to 40 per cent in the Great Level nesting colony where 28 of the original 35 adult cats were removed,” it was stated in the October 2015 report. In contrast much fewer cats were removed from the Tent colony, resulting in a lower increase of the breeding success: from zero to four per cent.

The IMARES researchers made some firm recommendations. The feral cat removal from the main tropicbird nesting colonies must be continued and expanded, especially shortly before and during the nesting season. More effective and human methods have to be used to eradicate the cats, preferably through poisoning with toxins and/or shooting. Both IMARES and Michiel Boeken recommended to continue the monitoring of the breeding success and the bird population in order to secure an overall long-term picture.

The research report titled “Monitoring the effect of cat removal on the reproductive success in Red-bill Tropicbird colonies on Saba” was written by M. Terpstra, E. van der Woude, Saba Park Manager Kai Wulf, J. van Rijn and A. “Dolfi” Debrot. The research was funded by the Dutch Ministry of Economic Affairs.

The researchers concluded that the removal of cats by means of trapping as conducted by the local nature foundation SCF was found to be quite labour intensive, inefficient and entailed excessive stress for the cats during the trapping and handling process. The animals are also wary of the traps and many times do not enter them.

Saba has a high density of feral cats. The researchers estimated in 2014 that the Great Level area had some 285 cats per square kilometre prior to cat removal. “This means that alternative methods and preferably even a combination of methods will be needed to control cat numbers in the seabird breeding colonies,” it was stated in the report.

The use of predator-control toxins, though considered controversial by many people, is the main and most successful tool used in the control of invasive predators worldwide. It has been used successfully before in Saba and it is a method that is acceptable to both expat and native residents to use toxins to protect the tropicbird from local extirpation, according to the IMARES researchers. Inhabitants have been interviewed on their perceptions regarding the acceptability of various control methods.

“In the past, the predator toxin Aldicarb was used successfully at the Saba sanitary landfill and provided overnight kills of more than fifty animals with minimal effort. An additional advantage of the use of potent predator toxins is that death takes place within minutes after consumption to the effect that these feral cats don’t have to suffer overnight trapping or handling stress.”

Periodic control is highly essential because the full eradication of feral cats is impossible without rigorous legislation and control on the importation, keeping and sterilising of house cats. The researchers remarked that it was important for the local government to recognise the need for the controlling of feral cats and to equip SCF or another government department to fulfil this task.

Trapping, neutering and releasing programmes were offered in the past as an alternative for euthanizing. It has been estimated that the total number of cats neutered and released up to 2014 was likely to have been more than one thousand.

Neutering and releasing the feral cats, however, doesn’t protect the newly hatched chicks from being eaten, as it merely contains the feral cat population. As such it was proposed to change the method to using toxins. The question did arise on how rats might impact the breeding success of the birds as the removal of (many) cats might lead to an increase in rat abundance and impact.

The IMARES programme has been terminated, and even though The Daily Herald was unable to get official word on the situation, this newspaper understood from reliable sources that the feral cat problem has become major once more. This, while the tropicbird is in the height of the breeding season.

The majority of the new chicks will unfortunately not make it and if not tackled, the Saba people might in the future hardly hear the screaming of these majestic birds as they soar above the steep cliffs of their unique island.