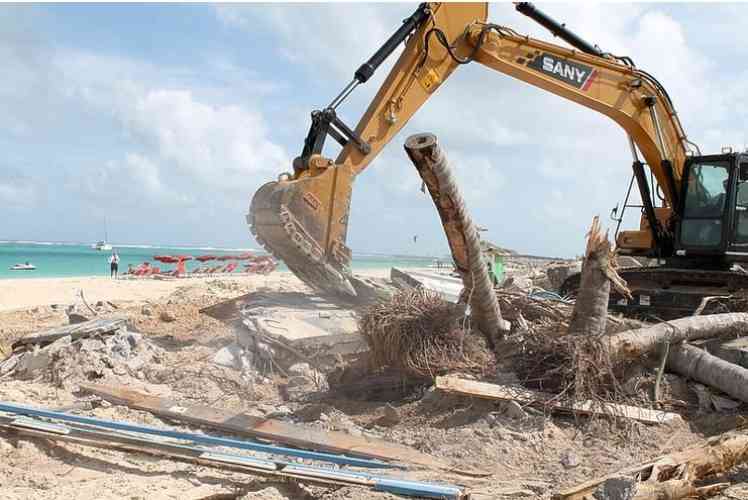 MARIGOT–The Executive Council at its meeting on Wednesday voted in favour of issuing a building permit to Sindextour, holder of a temporary occupation permit (AOT) for parcel AW33 on Orient Beach, to construct two beach restaurants, meeting post-Irma construction criteria.

This includes building the restaurants further back from the water, using light materials that can easily be disassembled, and the main structure (kitchen, restrooms) to be built from hard material (concrete).

The Daily Herald had reported early January that applications had been submitted by Sindextour for the rebuilding of five restaurants – Kon Tiki, Kakao, Waikiki, Bikini and Coco. It could not immediately be ascertained which of these five restaurants have gotten the go-ahead and which three applications are still pending approval.

The above was one of seven points on the agenda. On the first item, the Council decided to ratify the decision of the Tender Commission to award the contract for reform of the tax system of St. Martin to the specialist firm FIDAL, for an amount of €500,000.

This specialised company is responsible for carrying out a mission on tax system reform. This audit is the will of the majority party, which urgently wants to rethink taxation in order to revive the economy and generate reliable revenues after hurricane Irma.
The call for tenders was launched on December 15, 2017. Three bids were submitted on time: CMS Francis Lefebvre Avocats, Cabinet Fidal and Ernst & Young Avocats. Fidal was chosen.

Phase one of the audit will consist of a diagnosis of the current tax system (strengths and weaknesses) and a competitive analysis of the territory done in relation to its regional environment. Phase two concerns overhaul of the tax system on diagnosis, policy objectives and future investment projects, and rewriting of the general tax code and the organisation of a local control centre.

The Executive Council authorised the signing of a management agreement with the Directorate General of Customs and Indirect Duties (DGDDI). Since assessment, control and collection of taxes, duties, and other levies are carried out by State agents; this agreement defines the terms and conditions of remuneration for these agents.
A first agreement was signed on March 21, 2008. By agreement of March 18, 2014, the local authority then entrusted the Customs Directorate General with control of the tax on petroleum products, tourist tax and tax on vehicle rentals. As the framework was discussed again, the Executive Council authorised the President to sign the new convention on the same basis.

The Executive Council authorised the signing of a partnership agreement with the Department of Gironde. In a spirit of cooperation between public actors and in a spirit of national solidarity towards St. Martin citizens, the Département de la Gironde proposes to contribute to the financing of rehabilitation or post-Irma reconstruction operations. The Gironde County Council wanted to commit itself to supporting the elderly in the territory and voted for an investment grant of €100,000 to rehabilitate Bethany Home, the only medico-social structure that takes care of the elderly. The Executive Council authorized the signing of a partnership agreement between the two Collectivités for the implementation of this project.

President Gibbs thanked President of the Conseil Départemental de la Gironde, Jean-Luc Gleyze and the members of his Council for this solidarity gesture.
In other points, the Executive Council approved renovation projects for Jean-Louis Vanterpool Stadium in Marigot for an amount of €252,000 and Thelbert Carti Stadium sports field in Quartier d’ Orléans for an amount of €81,886.

For these two projects, a grant application will be submitted to Centre National pour le Développement du Sports (CNDS) covering all the eligible expenses of the two operations.
In the case of Jean-Louis Vanterpool Stadium, the works include repairing the perimeter fence, restoring sports facilities, refurbishing equipment, lighting and demolishing a wall. In the case of Thelbert Carti Stadium, the work consists of refurbishing the stadium, equipment and lighting.