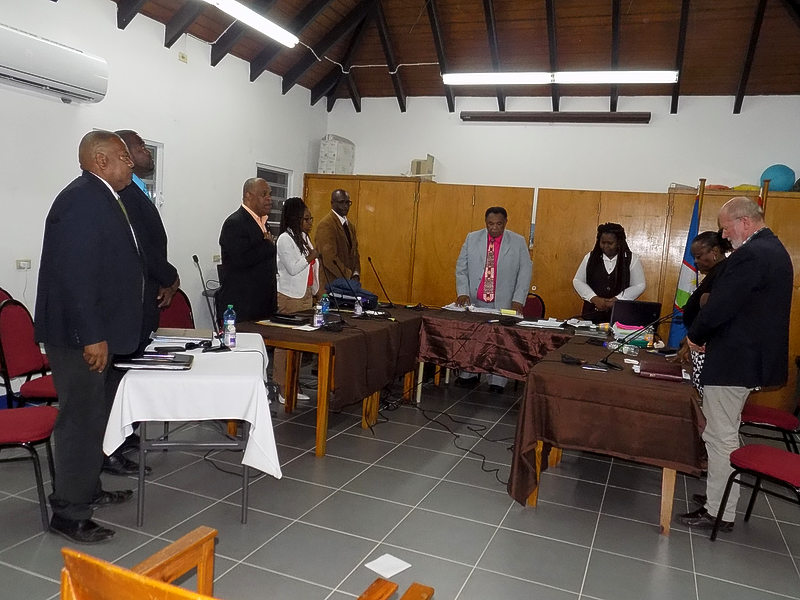 Opening of the Island Council meeting at the public library.

ST. EUSTATIUS–The Executive Council survived a vote of no-confidence during the Island Council meeting in which the agreement between NuStar N.V. and St. Eustatius was ratified.

The other discussions ranged from the tariffs for travel documents to setting up an external accountant for 2016-2018.

The proposal concerning the travel documents was sent back to the Executive Council for further discussions. Where the accountant was concerned the Council voted unanimously in favour of awarding the contract to accountancy firm Binder Dyker Otte & Co. BDO.

Concerning the NuStar agreement, leader of Progressive Labour Party (PLP) Clyde van Putten said that an agreement was ready to be signed on February 7, but because of one word the actual signing was delayed until February 11.

“I congratulate the carpenter [of the agreement Commissioner Charles Woodley – Ed.] and the computer technician [Commissioner Derrick Simmons – Ed] on bringing home the beef. This agreement will go a long way to balancing the budget as it was thrown out for being short by US $700,000,” Van Putten said.

PLP Councilwoman Rechelline Leerdam also congratulated the Commissioners on their hard work and said the monies derived from the harbour fees would be put to good use. She expounded on the fact that Statia has been going through financial difficulties under which the Island Government had to make tough choices. Where it came to subsidies they had to cut back for instance on Buzzy Bees day care centre, which was forced to raise fees. Independent Councilman Merkman joined the ranks of those congratulating both Commissioners.

Councilwoman for the opposition Democratic Party (DP) Adelka Spanner urged caution and constraint concerning the legalities that might arise due to the agreement not being signed in the correct manner.

DP Councilman Koos Sneek questioned whether the agreement was legal because Commissioner Woodley had signed the agreement instead of Island Governor Julian Woodley. He also was critical of the fact that under the agreement issues might arise concerning the boundaries of the Marine Park surrounding the island.

Sneek urged the Island Council to close the agreement in the right way. He said he is in favour of the agreement, but wanted it done in such a way that it would be beyond reproach.

Commissioner Woodley announced the formation of a Financial Oversight Committee to ensure that funds are not mishandled.

He said Government has been going through some tough constraints under the financial supervision, which he said, “is bogging down the island where bills were not being paid for months.”

He payment of the bills have to go through such a long process that Government Information Service (GIS) for instance ran out of toilet paper last week, and one of the workers brought toilet paper from home. He said other departments “have been subsidizing in similar ways as well.”

According to Woodley, the agreement with NuStar was “sound.” Together with Commissioner Simmons and Government’s lawyer they had gone over the legalities concerning him signing the agreement instead of Governor Woodley, who was instructed by Dutch Government Representative Gilbert Isabella not to sign.

Woodley claimed that a civil servant from the Netherlands had come to Statia and designated some territorial waters to the Marine Reserve without “any ratification” from the Island and Executive Council. He said they would be seeking legal advice concerning the issue.

Commissioner Simmons also said that the NuStar agreement was closed within the confines of the law as well as with the help of their lawyers. The NuStar agreement was adopted by the Island Council according to party lines in a 3-2 vote, with Merkman, Leerdam and Van Putten voting in favour, and Sneek and Spanner voting against.

The DP fraction presented a motion of no-confidence against the Executive Council for mismanagement and fraud. This motion was voted down with three votes against and two votes in favour of the motion.