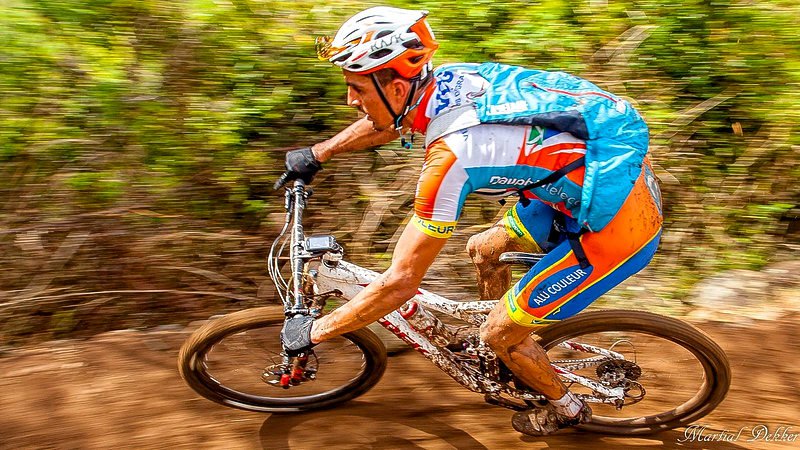 MARIGOT—This week sees a final tuning of the course for this coming Sunday’s Caribbean Cycling Federation (CCF) mountain bike race to be held on the trails in Bellevue.

The St. Maarten Cycling Federation is hosting the Caribbean Mountain Bike Championship for the first time having won the bid against Puerto Rico, Aruba and the Dominican Republic. Last year it was held in Puerto Rico.

Most of the participants will be arriving on Friday, September 23 and staying at sponsor Carl and Sons Unique Inn. They will be able to familiarise themselves with the course on Saturday afternoon.

Much is riding on the success of this event since Puerto Rico-based CCF Vice-President, Waldo Ortiz, on an inspection visit this summer described the course as “a world cup-class trail.”

Much of the credit for that seal of approval goes to Mike Kopec for the creation of the course including his signature “bullet” downhill trail accessed from the ascent up to Princess while volunteers and Tri Sport’s Fred Quetat have contributed to the final grooming of the trails.

The six kilometre course conforms to the CCF criteria, featuring the best aspects of Bellevue’s rugged terrain with superb views from the higher elevations though riders won’t be stopping for any selfies.

“Our course is mostly narrow single track, its rocky, and has steep climbs, which gives our riders who are used to that an advantage. Courses on other islands tend to include flat sugar cane fields or open fire roads.”

There’s a catch to the race however as only Caribbean nationals with licenses can participate and that has ruled out most of the die-hard aficionados. French St. Martin will be represented by Dean Hodge Jr and Otis Paines in the Elite Category while Joost Huele and Annelies Starreveld will ride for the Dutch side in Elite Men and Elite Women respectively.

“Dean has a French license which is why he’s riding for the French side and Joost and Annelies have passports issued in St. Maarten which made them eligible,” Susy explained. “And hopefully Adelio Brooks will be representing the French side in the Junior category. There’s no Junior entry from the Dutch side unfortunately.”

All is not lost however for the remainder of mountain bikers not eligible for the Championship race in the morning. A race has been organised for them on the same course starting at 2:30pm with a separate prize giving. Entry fee is US $25.

Maidwell-Piscione disclosed St. Maarten has the potential to host much bigger mountain bike events in the future, giving a boost to sports tourism and shining a light on a sport regarded as a small niche market.

“We will have the option to be put forward as a host for the new America’s Cup mountain bike series which is held in locations such as USA, South America, Central America and the Caribbean.

“So even with just 50 riders, if we do this well enough we can open up a new tourism sector in the future, potentially drawing 500 America’s Cup riders from around the world. The hard work now will be worth it to see the light at the end of the tunnel.”

St. Maarten Tourism Bureau is sponsoring the chip timing system, while Sound Masters is building the finish arch, and Atlantic Signs is donating all the signage.