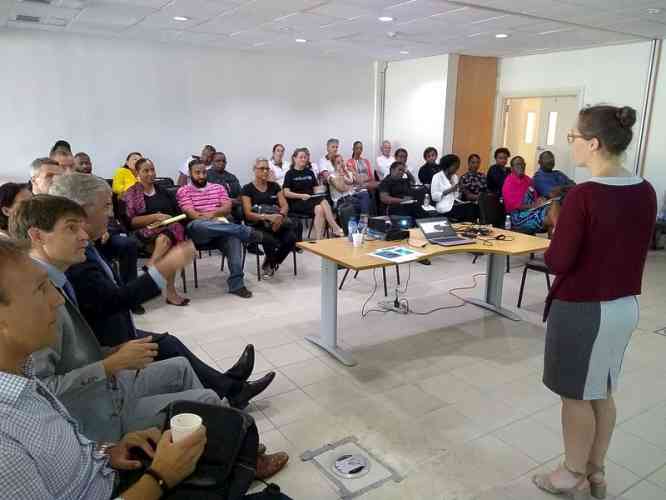 ALKMAAR–“A highly positive experience and a useful exercise” is how Safety region Noord-Holland Noord crisis management expert Viola van Baardwijk described the work she has done in and for St. Maarten, in particular Emergency Support Function (ESF) 7 which is in charge of evacuations, shelters, relief and mass care for residents before, during and after disasters.

Van Baardwijk, a team leader at the emergency call centre of Noord-Holland Noord in Alkmaar, was in St. Maarten this year for workshops in May and June, and a so-called table-top exercise in October as part of the larger project of the international cooperation agency of the Association of Dutch Municipalities VNG International to assist St. Maarten after Hurricane Irma.

Van Baardwijk is one of the experts who offered to help. “I saw that VNG was looking for experts in, among other things, crisis management. Considering my background and experience, I decided to respond. I had seen the images of the destruction that Hurricane Irma caused in the media, and I wanted to help,” she told The Daily Herald in an interview. Van Baardwijk’s boss gave her part-time paid leave for this project.

Civil servants attended, but also organisations such as the Red Cross, the United Nations Children’s Fund UNICEF, K1 Britannia, as well as the St. Maarten Police Force, the Fire Department, the Ambulance Department, the Court of Guardianship, the Government Communications Department and utilities company GEBE. Close to 30 persons were in attendance.

Discussed were issues such as who is responsible for what and when, what and who is needed prior, during and after the disaster for vital essential issues such as shelter, evacuation, relief and mass care. Sometimes it can be confusing who does what and the roles need to be clear. Logistical issues that were experienced at the time of Hurricane Irma were discussed.

Especially a lot has to be arranged before a disaster like a hurricane strikes, explained Van Baardwijk. “Sometimes it was not clear who carried what responsibility, but eventually the roles became clearer.”

To help establish clarity in the different roles and the specific tasks, so-called task cards were developed which were introduced during the second workshop in June with the coordinators of ESF7. The task cards serve as a compact tool for the coordinators so they know with one look at the task card what they need to do and when without having to go through the thick manuals.

At that time talks were also held with ESF4 (Fire Department), ESF5 (Police) and ESF10 (tourism). The coordinators received the ESF7 task cards which defined their roles.

Van Baardwijk said the workshops in May and June were a success, also because the participants were very open in sharing their experiences and concerns.

In October 2018, a so-called table-top exercise was held with ESF7 that counted on the participation of most people who attended the first workshop in May. This is a mostly paper exercise whereby participants are given a scenario on which they must act and bring their tasks into practice. The scenario was not a hurricane, but an earthquake, followed by a tsunami three hours later. A water management expert of the water institution IHE in Delft developed a computer-simulated tsunami scenario for the exercise.

Van Baardwijk lauded the input of the participants at the table-top exercise. “It was an entire new experience for them. They were very enthusiastic, and highly motivated to do everything right. It was about ‘how can we do better next time?’” she said. The table-top exercise was a big success, but it remains important to have these exercises on a regular basis. In November, a larger exercise will take place with several ESFs.

One of the conclusions of the several trainings was that there is a need for more information management and communication between the stakeholders. Work has started on a more structural way of exchanging information as well as the setting up of a back office that will serve as an information intersection for the Emergency Operations Centre (EOC) and the ESFs.

Van Baardwijk looked back at a very positive time in St. Maarten. “I found it very inspiring to work with the participants. They were eager and hard-working. I think we learned a lot from each other. It is beautiful to see that despite everything that happened, people show resilience and keep on going to make things better.”

VNG International is working with a pool of experts for the St. Maarten project. Experts in the fields of disaster management, legal affairs, building norms, social housing and environmental norms come from the different municipalities and organisations.

VNG International has primarily focused on supporting ESF6 (Public Health and Medical Assistance), ESF7 and ESF8 (Public Information and Media), which have been prioritised by the St. Maarten ministries.

The aim of this ongoing project is a revisited disaster management structure with clear responsibilities for all those involved, to contribute to the resilience of the St. Maarten government and by extension the island in future disasters.