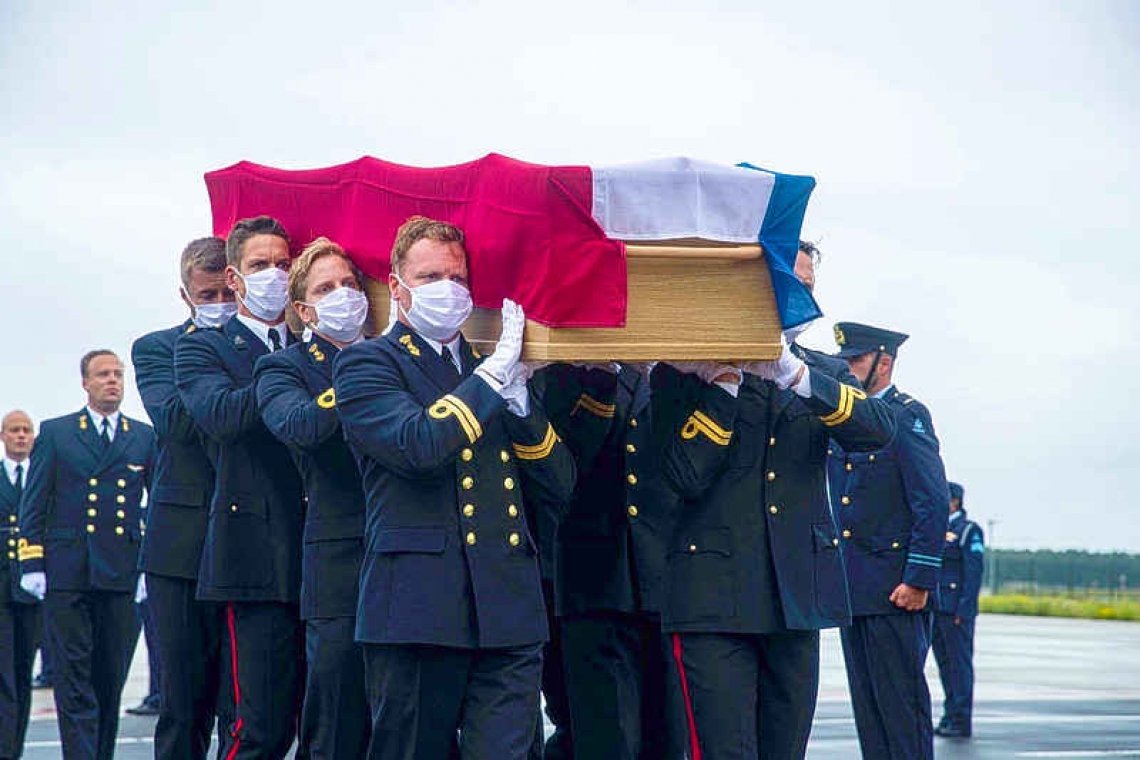 Dutch Defence colleagues carry the remains of helicopter pilot Christine Martens and tactical coordinator Erwin Warnies at the Air Force base in Eindhoven, the Netherlands on Saturday. (Dutch Defence photo)

The coffins with the remains of helicopter pilot Martens and tactical coordinator Warnies were received with military ceremony as they were carried from the military aircraft in Eindhoven, the Netherlands, on Saturday. (Dutch Defence photo)

THE HAGUE–The coffins with the remains of the two Dutch Defence helicopter crew members who died in the crash near Aruba on July 19 arrived in the Netherlands on Saturday and were handed over to the families of the deceased after a solemn ceremony.

The KDC-10 Dutch Defence aircraft left Curaçao’s Hato airport on Friday evening and arrived at the Air Force base in Eindhoven the following day. Both in Curaçao and in the Netherlands a solemn military ceremony was held to honour the two victims, pilot Christine Martens (34) and tactical coordinator Erwin Warnies (33).

Martens and Warnies, both lieutenants second class of the oldest category, were on their way back to Curaçao from patrolling the maritime borders of Aruba when their NH-90 helicopter crashed into the sea in sight of the helicopter station ship HMNLS Groningen.Patrol vessel crew members who went to the crash tried to reanimate Martens and Warnies, but were unsuccessful.

The two other crew members on the helicopter, who were seated in the back, survived and only sustained light injuries. The two surviving crew members accompanied their two deceased colleagues on the KDC-10 flight to the Netherlands.Colleagues carried the coffins, draped with the Dutch flag, on their shoulders from the aircraft to the hangar where officials and family members were standing. At least 100 members of the Royal Netherlands Navy and Air Force formed an honorary lane from the aircraft to the hangar. In Curaçao, colleagues also formed an honorary lane on the airport platform.

Dutch Minister of Defence Ank Bijleveld-Schouten was present at Saturday’s ceremony at the Eindhoven air base. “It is horrible what has happened. We are all deeply affected and have intense empathy for the families, friends and colleagues. We will support them where we can. Christine Martens and Erwin Warnies always worked with heart and soul for the safety of other people,” she said.Also present at the ceremony were President of the Second Chamber of the Dutch Parliament Khadijah Arib, State Secretary of Defence Barbara Visser, Commander of the Netherlands Armed Forces Rob Bauer, and commanders of the Navy and Air Force, Vice-Admiral Rob Kramer and Lieutenant-General Dennis Luyt, respectively, to pay their respects and to support the relatives of the deceased.

The cause of the crash is still unknown and is being investigated by the Dutch authorities. A diving team has managed to retrieve the black box with the flight recorder. A KDC-10 military transport aircraft arrived in Curaçao early Wednesday, with members of the Defence Safety Inspection and the Investigative Council for Safety on board.Also on board were detectives of the Royal Netherlands Marechaussee who will carry out a factual investigation. All passengers were tested for COVID-19 prior to their departure to Curaçao. Defence has secured psychological assistance for the crew of HMNLS Groningen.

The helicopter sank on Monday night after two of the four floating devices which kept the aircraft on the water surface burst. It proved impossible to secure the helicopter due to the high winds and waves, and it sank to a depth of more than one kilometre, at some 100 kilometres west of Aruba.

On Tuesday, HMNLS Groningen arrived in Curaçao with Martens’ and Warnies’ bodies on board.The helicopter crash, the first one with a Dutch NH-90, has deeply moved many people in and outside Defence. Thousands of heart-warming reactions have been placed on the condolence register on Defence’s website. It is still possible to leave a reaction onwww.defensie.nl. The register will be handed over the families of the deceased after it is closed.