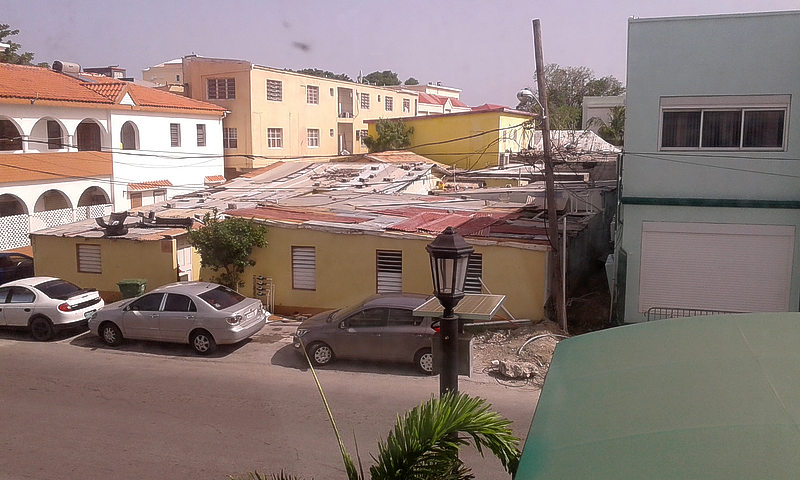 PHILIPSBURG–A young man at his wit’s end, a frustrated young woman and their severely disabled brother live in the heart of Philipsburg in shanty town-like conditions on government long lease land they have inherited from a great aunt.

The siblings, Asivio and Tommeka Matthew, are not living this way on their own accord; they are in this state, due to inaction from Government related to the transfer of the deed to them.

Their inheritance sits on Cannegieter Street across from the Soualiga Building that houses NAGICO Insurances and next to a recently constructed building housing government offices.

For more than half a decade, the Matthews have been going to various government departments and petitioning the revolving ministers in charge of the Ministry of Public Housing, Spatial Development, Environment and Infrastructure VROMI to grant them the long lease to the land willed to them by their great aunt Alice Mathew. The long lease was acquired by Alice upon the death of her husband William Pantophlet.

The passing on of long lease property has been a practice for many years on St. Maarten and it was in this way that Alice obtained it from Pantophlet and she passed it on to her heirs. Those heirs claim they have been pushed around from one department to the next and in many cases their letters have gone unanswered.

They have taken their case to the Ombudsman to seek some recourse and have approached VROMI Minister Christophe Emmanuel for assistance. They are awaiting outcomes from both fronts.

In the meantime, Asivio said he is growing more and more fed up. “Why can’t I prosper in my own country? I am living in a slum and I can’t do anything about it. Without the deed, I can’t get permission to repair or rebuild anything,” he said.

Without the deed, he also cannot approach any bank for needed funds to build a proper home for his family. He and his mother Mary Joseph are very distraught about the condition their challenged sibling and son Deniseo has to endure.

The Matthews hope their plea for a resolution of their deed claim will come soon. Asivio said everyone should have a fair chance at proper housing and to be able to care for their family. He pointed to the building next door to him that houses government offices, saying it is owned by a top official in the Ministry of VROMI who has been allowed the right to further improve his family’s situation.

“Why am I being blocked by VROMI from doing the same,” he said, adding that past ministers have instructed the departments responsible to issue the long lease to the family.