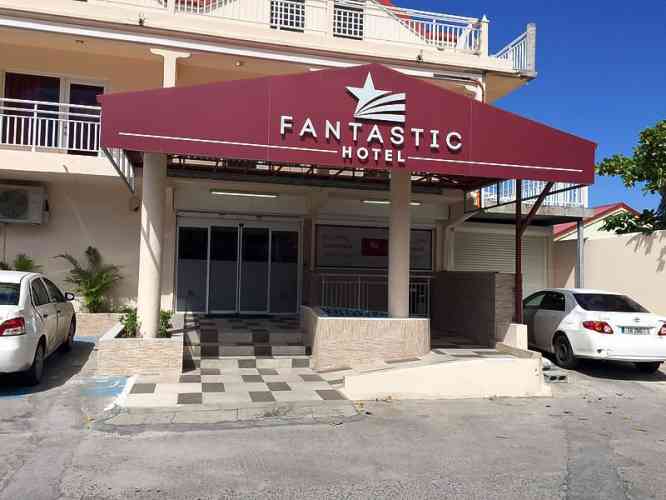 MARIGOT–Choosing to name a hotel “Fantastic” must have been a bold decision considering what the name implies, a decision most likely designed to attract attention. As a marketing ploy it certainly does that. The hotel has been in the news quite a lot lately, hosting various functions in its adjacent conference room. If you weren’t in the know, you would be curious to know where it is.

Located at 11, Tah Bloudy, in Concordia, the hotel is owned by the Jeffrey family. The building formerly housed a supermarket on the ground floor with offices on the upper floor before it was turned into a hotel, a dedicated two-year project.

The good news for the Collectivité is that this family-run hotel is another addition to much-needed hotel inventory. Its 40 clean and comfortable rooms, all with bathrooms, have all the amenities one would expect of a small city hotel; TV, Wi-Fi, air conditioner, equipped kitchenettes and fridges, and a keyless room card entry system for maximum security. Room rates are from 70 euros to 120 euros per night.

An elevator takes you to the upper floor while behind the hotel is a well-maintained swimming pool, so inviting, you want to dive in immediately. Hard to believe you are in Concordia. And up on the roof is a walkway around the perimeter of the building for an evening or early morning stroll.

Service is taken care of by some six employees, three of whom are chamber maids. There’s a receptionist and family members fill in on other duties. There are plans to increase the number of rooms, open a restaurant and a gym.  The family declined to say how much was spent on the renovation and remodelling, but also add they have received nothing so far in the way of aid from the French government.

One would assume that Hurricane Irma was responsible for changes noticed everywhere, but in this case the hotel was conceived well before Irma.

“We actually opened here in November 2017, before that we had been running a guest house in Lowtown, St. James, for over 20 years very successfully,” explained Kenroy Jeffrey. “It’s closed for now because of Irma damage but the business was very good, and we wanted to expand and came up with the idea for the hotel.  We opened with a few rooms and slowly opened more rooms as we went along.

“Obviously, the season last year was not so good so close after Irma, but we’re looking forward to a good season this year. Reservations look good.”

Asked if the location in Concordia was a drawback, the reply came back in the negative. “No, people find us, and we do own the parking area at the front of the hotel.”

As for the market the hotel wants to attract it is assumed that would be the local and regional market, and business travellers. The family insists, however, the market is international.