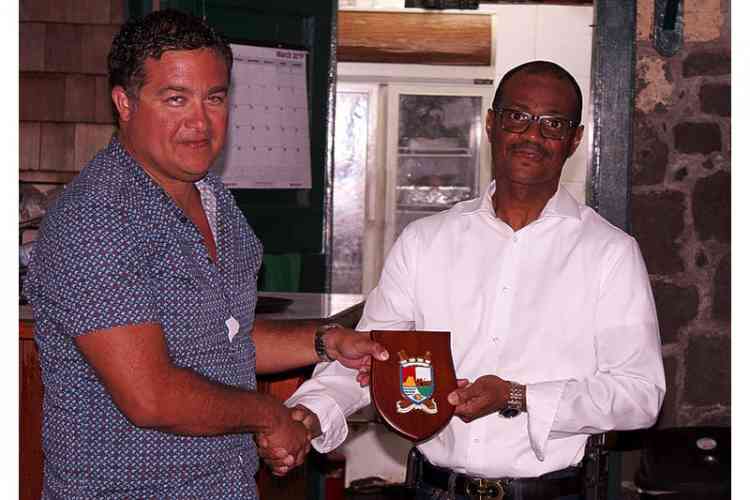 On hand for the farewell party were Deputy Government Commissioner Mervyn Stegers, members of the NuStar first response team, Statia’s Fire Chief Andre Bennett, and current and former members of the Fire Department.

It was a night filled with laughter, memories and helpful advice for the future. The evening featured a “Tip and a Talk” segment during which former and current fire fighters gave some advice, talked a little about the relationship they had with Tromp over the years and expressed their gratitude to him for his service and contributions to the fire department.

Many stated that Trump had gone above and beyond the call of duty, without seeking any recognition, to render aid or to show compassion to persons in and outside the fire department.

NuStar first response team member Olton Berkel said a few words about his relationship with Tromp while working with him in Aruba.

Stegers said he was impressed with the quality and atmosphere of Tromp and his team. He said he admired Tromp’s relationship with his fellow firemen and -women.

“I advise you to bring the same approach you had with dealing and interacting with your colleagues within the fire department to your new position,” Stegers said.

Tromp will be taking up a new job in the office of the Island Secretary in Bonaire.

“Working with you for the past seven years, I have learned a lot from you and I have put a lot of what you have taught me into practice, and I see the fruits today. … Maybe we not always agree on every point, but when it came to the job, we both had a clear understanding of the laws, rules and regulations and how we had to follow them. … I thank you for that.

“It was a pleasure working with you and we wish you all the best in your new endeavour, and whenever you come back to St. Eustatius, pass by the department and say hello,” Bennett said before presenting Tromp with a small token of appreciation on behalf of Statia’s Fire Department.

Statia will have six new candidates who are expected to be hired for the department this year, Tromp said. He thanked everyone for the “great job” done to ensure “progress” within the fire department. He said he would take fond memories with him always, and hoped to return to Statia one day to visit, as the island is very close to his heart.