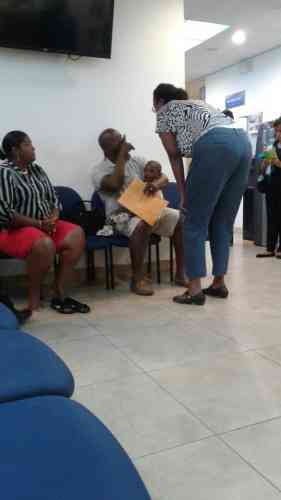 PHILIPSBURG–The father of a seriously ill three-year-old child was sentenced by the Court of First Instance on Thursday for fighting with and injuring two staff members and a security guard in the offices of Social and Health Insurances SZV on November 23, 2017.

For these aggressive acts, Oliver Arrindell (56) was sentenced according to the Prosecutor’s demand to 120 hours of community service, 40 of which were suspended, on two years’ probation with Parole Board guidance, including aggression replacement training (ART).

The incident started when an SZV staffer reportedly shoved the defendant, who had been holding his child, in an effort to get the father to move from an employee-only section of the office, resulting in the child falling from his father’s arms.

The incident resulted in a brawl involving at least two staffers, a security officer on duty and the defendant. Many SZV clients witnessed the incident.

In justifying his very unruly behaviour before the Court, the defendant said he had been complaining that SZV was giving him a run-around and that he had been waiting for a very long time to receive a response from the healthcare insurer regarding treatment for his child.

The visibly frustrated man at one point jumped over the counter at SZV, sat in an employee’s chair and said he was not moving until he received an answer on the matter of treatment for his child. Employees tried to convince him to move, but he refused to do so.

According to eyewitnesses, things got out of control after a male employee who was telling the man to move shoved him in an effort to get him off the chair, resulting in the man’s child falling to the floor.

The defendant retaliated, and a fight broke out during which two SZV staff members were punched and a security guard was bitten in his finger while holding the aggressive father down the floor as he was waiting for the police to arrive.

Officers managed to calm the situation down and let the man go. He turned himself in the next day.

Arrindell was also charged with threat and destruction of a plaster wall, but these charges were dropped for lack of evidence.

The Prosecutor said he understood that the defendant was under a lot of pressure and felt frustrated and stressed because his young son urgently needed treatment abroad, which was not provided by SZV.

“I know it can be difficult and frustrating sometimes when you need a service from a government entity. I understand the suspect’s sense of impotence in trying to get something done for his child. I understand his anger with SZV, but he should not have turned his anger into violence. You reach more when you know how to keep your self-control,” the Prosecutor told the defendant.

According to the Prosecutor’s Office, the ill-tempered and aggressive man would benefit from ART. “He had no reason to resort to violence, yet it is understandable that he lost his patience,” the Prosecutor said in holding it against the defendant that he had not shown remorse and had tried to put the blame on the SZV workers and the security guard.

Attorney-at-law Shaira Bommel said her client should be discharged from prosecution. The casino controller by profession does not have an aggressive nature and was at his wits’ end over a three-year-long issue with SZV pertaining to medical treatment for his child, she said.

“Medical specialists and doctors agree that St. Maarten cannot provide the assistance his son needs. My client is insured and has a job with government for 30 years. Only the insurer is making problems. His son was sent to the Netherlands and Colombia but did not receive any treatment. His son’s brainstem is damaged and requires intensive therapy, which SZV is frustrating, and on top of that his wife has cervical cancer.

“As SZV was indecisive, my client wanted to convince the insurer of the seriousness of the situation. He should not have jumped over the desk and sat in a chair,” his lawyer said.

Her client was the victim of outside pressure and was not himself, the lawyer stated in pleading psychological circumstances beyond her client’s control, and said he was confronted with an aggressive SZV supervisor and security guard.

Bommel said her client was also involved in a civil case concerning SZV’s decision to discontinue his son’s therapy.

The Court found the mistreatment of three persons proven and acquitted the defendant of all other charges. The Judge said she understood the defendant’s “powerful” emotions, but added that these were no excuse.