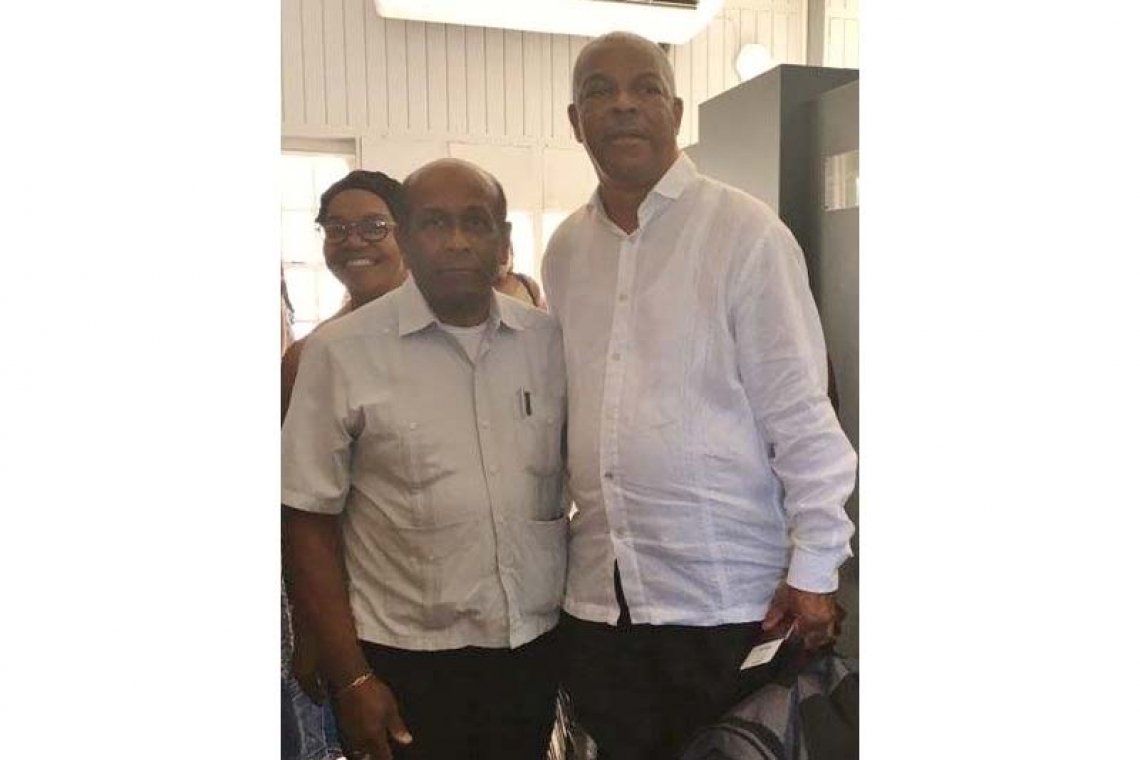 13B:Priest Simon Wilson (right) with official administrator of the Roman Catholic Church in St. Eustatius Ricardo Fortin Sr. (left).  ST. EUSTATIUS–Roman-Catholic priest Simon Wilson left St. Eustatius on Sunday to return to Saba after his tenure as the local priest of Statia’s Roman Catholic parish came to an end. His departure has left Statia without a replacement and the congregation bewildered by the transfer, particularly at a time of individual and community distress during the coronavirus pandemic.

Church members are wondering whom to turn to now for comfort and guidance as they try to deal with the challenges of travel restrictions, social distancing and other problems with which they are faced during the COVID-19 crisis.

When “Father Simon” Wilson celebrated 40 years of service as a priest in July, a letter from Bishop Luis Secco was read to the congregation in which his farewell from Statia’s congregation was announced.

The weeks that followed the letter’s announcement left congregants with more questions. They wondered what the urgency was that caused a transfer without a replacement and why there was no community input into these decisions. “We are instructed to tithe, but we are not considered as investors in our church,” some stated.

Priest Advisory Board member Sara Stone expressed similar sentiments on behalf of the Statia congregation. “As a member of the Priest Advisory Board we are without answers as to why Father Simon left the island and no transition of responsibilities was put in place. Why do we not have a priest? Now Saba has two,” she said.

This was not the first time that a priest was transferred from Statia without prior notice. Statians were also unable to bid farewell to Wilson’s predecessor Rafael “Raffie” Cananea, who abruptly left the church during Christmas celebrations.

Members of the congregation say that the church community is suffering because of this situation. Those faithful to the church continue to attend services despite crumbling walls, extremely hot conditions and withering exterior and interior, as well as the neglected church structure.

They wonder why they are being treated as irrelevant to the higher echelons in the Roman Catholic community, which has left the congregation with the inability to celebrate Mass and perform baptisms and wedding ceremonies led by a priest.

Congregants said that Simon was an innovative leader in the church who ignited interest in Statia’s Catholic Church beyond the borders of the little island. Because of Simon, live-streaming of Mass on Facebook gathered an international following of faithful viewers of various denominations.

The church members hope that their voices will be heard to remind those higher up in the church organisation that they are relevant and faithful servants, who should be respectfully treated as such.

Ricardo Fortin Sr., who will be the official administrator of the St. Eustatius Roman Catholic Church, called the situation an “offence against the community.”

Fortin, who has been an ordained lay Eucharist minister for more than 20 years and has been assisting all parish priests in Statia for more than 40 years, will be responsible for the Statia Parish for as long as there is no priest. “I have served on several parish councils and was appointed treasurer during the period of Father Peter de Jong,” said Fortin.