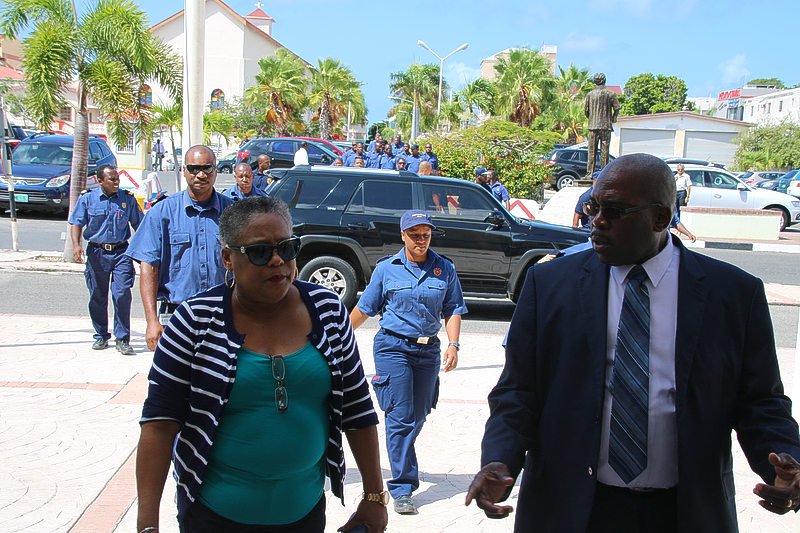 PHILIPSBURG–St. Maarten’s fire-fighters are fed up with Government and decided to stage a protest on Thursday morning. Close to forty of them gathered at the Philipsburg office of their union, Windward Islands Civil Servants Union/Private Sector Union (WICSU/PSU).

Their grievances have to do with the so-called Function Book dealing with their promotions. Several meetings were postponed or moved, so the union and its members had enough and decided to stage the protest. WICSU/PSU President Julia Solognier said in an invited comment that the action should not be considered a strike, but a way to get the attention of the Prime Minister, who is in charge of the Fire Department.

“We have spoken to the Secretary-General for months and every time the meetings got moved. It is time for a solution,” Solognier said.

The group marched from the union office to Parliament to show their disapproval of the way they are being treated. Members of Parliament (MPs) welcomed the group, which filled the public tribune prior to a Central Committee meeting.

MP Rodolphe Samuel offered to bring the issue to the door of Prime Minister William Marlin and accompanied the group to the Government Administration Building, where he,Solognier and shop stewards went to speak to Marlin while the disgruntled fire-fighters waited outside the building.

The meeting took approximately two hours, after which the group faced their members and told them they would be briefed at the WICSU/PSU officeabout what had transpired in the meeting. Three hours later, Solognier informed The Daily Herald that the meeting had been fruitful and they had been able to come to an agreement.

“We informed the Prime Minister about the urgency to regulate the Function Book, Government having to pay the fire-fighters’ correct wages for operating 24/7. A committee will be formed comprising the union, Personnel Department and Government to regulate the issues as soon as possible. This will allow the committee to come with the solutions right away and present them to the Prime Minister for regulating,” said Solognier.

A separate committee also will be formed comprising workers who know what needs to be done when it comes to their promotions and the possibility to grow in the Fire Department structure.

The fire-fighters returned to their posts later on Thursday.