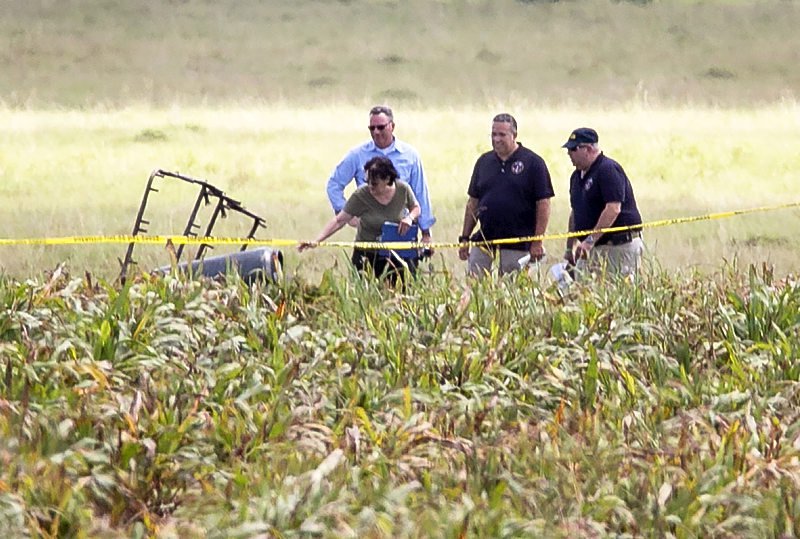 SAN ANTONIO–U.S. safety investigators in central Texas began gathering evidence on Sunday into what caused the crash of a hot air balloon that killed 16 people after it hit a power line and plummeted to the ground in flames.

The balloon crashed on Saturday into a pasture near Lockhart, about 30 miles (48 km) south of Austin, killing all aboard. It was the deadliest crash ever involving a hot air balloon in the Western Hemisphere, according to the Balloon Federation of North America. Aerial television footage showed flattened remnants of the red, white and blue balloon, adorned with a yellow smiley face wearing sunglasses.
The crash comes two years after the National Transportation Safety Board recommended greater oversight of the hot air balloon industry, said Robert Sumwalt, who is heading the NTSB’s investigation of the accident.
“The NTSB feels that there needs to be greater oversight by the regulator, and that regulator is the Federal Aviation Administration,” Sumwalt told a news conference near the crash site on Sunday. The FAA could not be immediately reached for comment.
Sumwalt said the balloon struck high-voltage power lines crossing the pasture before it crashed. But he said it had yet to be determined whether the fire started before or after it struck the wires.
The balloon took off about 20 minutes late, after passengers met in a Walmart parking lot and took a van to a nearby launch site, he said. Investigators want to know why takeoff was delayed.
Investigators have recovered cameras, iPads and mobile phones belonging the people on board the balloon. Most of the devices were damaged, but NTSB investigators still hoped to be able to gain information from them, he said.
Not counting Saturday’s incident, there have been 60 hot air balloon crashes in the United States since 2011, leading to seven deaths, Sumwalt said.
The balloon was operated by Heart of Texas Hot Air Balloon Rides, based in New Braunfels, according to the NTSB. Attempts to reach the company for comment were unsuccessful. Federal Aviation Administration records showed that Nichols had a 2014 commercial pilot’s license for hot air balloons, with an address in Chesterfield, Missouri. Authorities have not released the names of the passengers.
But friends and family of Paige Brabson and her mother, Lorilee Brabson, said the two women are among the dead. Paige Brabson was herself a new mother, according to a Facebook post by Ivan Monterrosa. It was not immediately clear where the women lived, but Monterrosa’s Facebook profile indicated that he graduated from high school in Wylie, Texas, in 2011.
“Yesterday, the beloved mother of my daughter, Paige Brabson and her mother, Lorilee Brabson, both passed away in a tragic hot air balloon accident,” Monterrosa wrote. “All I ask for are prayers and good vibes not just for myself but the Brabson family as well.”
The firm’s records as well as photos and videos will be part of the investigation, Sumwalt said. The balloon company said in a recorded telephone message that chief pilot and owner Alfred “Skip” Nichols had died in the crash and all flights were canceled.